Shares of lululemon rose 9.8% in the after-hours trading session on Sep 1, backed by the strong results and a raised view. The Zacks Rank #3 (Hold) company’s shares have lost 2.1% in the past three months compared with the industry’s decline of 8%. 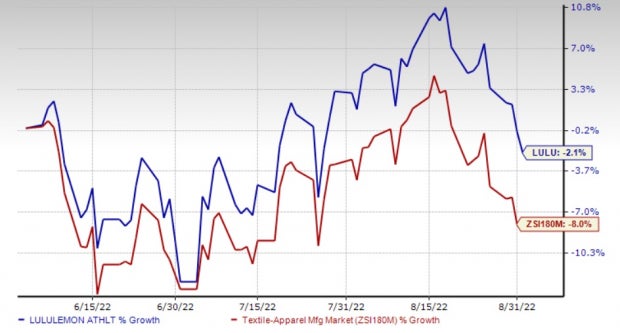 The Vancouver, Canada-based company’s quarterly revenues advanced 28.8% year over year to $1,868.3 million and surpassed the Zacks Consensus Estimate of $1,770 million and our estimate of 1,772.2 million. Revenue growth was mainly driven by the strong momentum in its business, driven by a favorable response to its products. The company’s net revenues grew 28% in North America and 35% internationally. Compared with the second quarter of fiscal 2019, net revenues improved 112%, witnessing a three-year CAGR of 28%.

In the company’s store channel, sales increased 30% year over year and 16% on a three-year CAGR basis. Comparable sales in stores increased 18%. Management highlighted that productivity was higher in second-quarter fiscal 2022 than the 2019 level. The company had 98% of stores open in the fiscal second quarter. It currently has 99% of its stores open.

The gross profit improved 25% year over year to $1,055.5 million. However, the gross margin contracted 160 basis points (bps) to 56.5%, thanks to a 150-bps decline in the product margin. The product margin in the fiscal second quarter was impacted by a 130-bps increase in air freight due to the ongoing supply-chain headwinds, a 30-bps impact of higher markdowns and a 40-bps deleverage from foreign currency. This was partly negated by a 30-bps leverage on fixed costs, driven by occupancy and depreciation. The gross margin expanded 150 bps from second-quarter fiscal 2019.

SG&A expenses of $662.3 million increased 22.4% from the year-ago quarter. SG&A expenses, as a percentage of net revenues, were 35.4%, down 190 bps from 37.3% reported in the prior-year quarter, owing to the leverage in store and digital channels, and slightly favorable currency rates. This was somewhat offset by higher investments in corporate SG&A and depreciation.

In the fiscal second quarter, the company opened 21 net new stores and completed six co-located optimizations. As of Jun 30, 2022, it operated 600 stores.

lululemon exited the quarter with cash and cash equivalents of $498.8 million, and stockholders’ equity of $2,857.8 million. At the end of second-quarter fiscal 2022, the company had $394.8 million remaining under its committed revolving credit facility.

In second-quarter fiscal 2022, management repurchased 420,000 million shares at an average rate of $298 per share. As of Jun 30, 2022, the company had $830 million remaining under its recently authorized $1 billion share repurchase program.

For the third quarter of fiscal 2022, management anticipates net revenues of $1.78-$1.805 billion, indicating 23-24% year-over-year growth and a 25% rise on a three-year CAGR basis. The company expects the fiscal third-quarter gross margin to be down 50-70 bps year over year.

The company raised its guidance for fiscal 2022. lululemon anticipates net revenues of $7.865-$7.94 billion compared with the prior mentioned $7.61-$7.71 billion. The revised view represents a three-year CAGR of 26%. The sales view assumes e-commerce growth in the low- to mid-20s range relative to that reported in fiscal 2021, and compares with a high-teens to low-20s range expected earlier. The company’s revenue guidance suggests three-year CAGR growth of 26%, higher than the 3-year revenue CAGR of 19% leading up to fiscal 2020.

lululemon anticipates a gross margin decline of 100-130 bps for fiscal 2022 compared with a 100-150 bps decline mentioned earlier. The decline is expected to result from higher investments in the distribution center network and more normalized markdowns from the low levels witnessed in the prior year. The company estimates an effective tax rate of 28% for the fiscal third quarter.

Caleres has a Zacks Rank #2 at present. Shares of CAL have declined 13.7% in the past three months. The company has a trailing four-quarter earnings surprise of 34.9%, on average. You can see the complete list of today’s Zacks #1 Rank stocks here.

The Zacks Consensus Estimate for Caleres’ current-year sales and EPS suggests growth of 5.6% and 0.9%, respectively, from the year-ago reported figures.

Snap-On currently carries a Zacks Rank of 2. SNA has a trailing four-quarter earnings surprise of 8.9%, on average. Shares of SNA have declined 2.3% in the past three months.

The Zacks Consensus Estimate for Snap-On’s current financial year’s sales and EPS suggests growth of 4.7% and 8.2%, respectively, from the year-ago period's reported numbers.

On Holding currently carries a Zacks Rank #2. ONON has a trailing four-quarter earnings surprise of 537.8%, on average. Shares of ONON have declined 11.1% in the past three months.

The Zacks Consensus Estimate for On Holding's current financial-year sales and earnings suggests growth of 45.8% and 233.3%, respectively, from the year-ago period's reported figures.