The DSMB meeting was held per regular schedule after the completion of the enrollment of the study in its 320 mg cohort.

The DSMB examined the safety data from all the subjects enrolled in the study and recommended that the company continue with the study without any modification. The positive review further confirms PLN-74809's safety profile to date.

The results from the INTEGRIS-IPF 320 mg dose cohort study are expected in early 2023.

Post the announcement of the news, the stock moved up 5.29% on Sep 1. Shares of Pliant have returned 50.3% in the year-to-date period against the industry’s decline of 23.9% 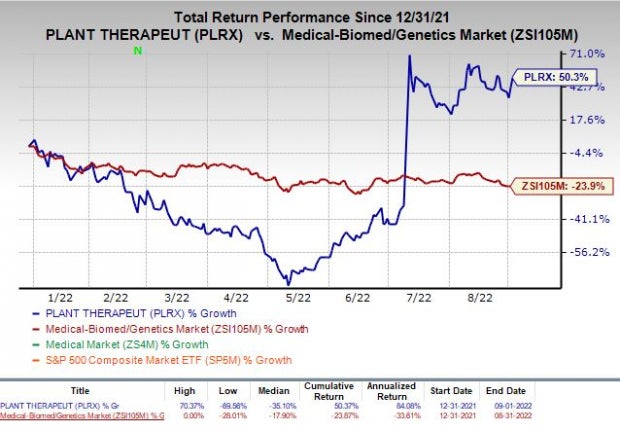 Investors must note that Pliant had announced positive results for the phase IIa study of PLN-74809 at once-daily doses of 40 mg, 80 mg, 160 mg or placebo for 12 weeks in 90 patients with IPF. The trial met both its primary and secondary endpoint. It demonstrated well tolerability and positive treatment effect on forced vital capacity (FVC) and Quantitative Lung Fibrosis (QLF) of PLN-74809 in the IPF patients over a 12-week treatment period. It also exhibited a favorable pharmacokinetic profile.

Apart from IPF, the lead candidate, PLN-74809 is being developed for the treatment of primary sclerosing cholangitis (PSC). In July, the company received Fast Track status from the FDA for PLN-74809, for the potential treatment of PSC.

PLN-74809 is currently being evaluated for PSC as a part of the INTEGRIS-PSC phase II study. Pliant expects top-line results from the aforementioned study in the first half of 2023.

Earnings of Sutro beat estimates in two of the trailing four quarters, were in line in one and missed the same on the remaining occasion. The average negative earnings surprise for STRO is 1.13%.

AXS or SIGI: Which P&C Insurance Stock is Better Placed?