AXS-07 is a novel, oral, rapidly absorbed, multi-mechanistic, investigational drug under development for the acute treatment of migraine.

The two co-primary endpoints of the study have been set at the pain relief experienced by patients and the absence of any bothering symptoms in the subjects two hours post-dosing.

The study is not a regulatory requirement and is being conducted by Axsome to bring in more clarity to the AXS-07’s clinical profile.

Shares of Axsome have returned 65.6% so far this year against the industry’s decline of 23.9%. 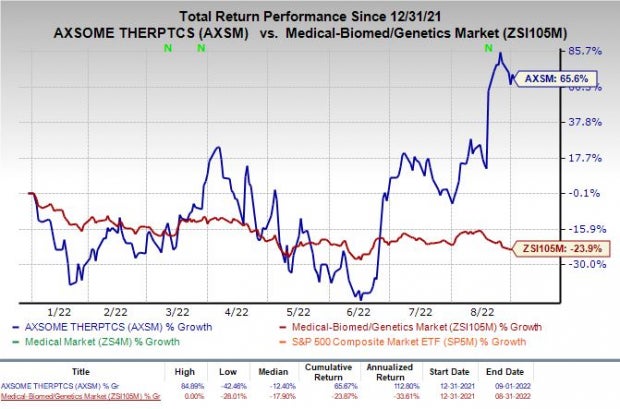 The company had filed a new drug application (NDA) seeking approval for AXS-07 in September 2021, for which the FDA had set a Prescription Drug User Fee Act (PDUFA) target action date of Apr 30. 2022.

However, the company received a compete response letter (CRL) from the FDA regarding its NDA in April for AXS-07 to treat acute migraine.

The FDA did not raise any clinical efficacy or safety concerns regarding the candidate. It also did not request any new clinical studies to support the approval of AXS-07. However, the FDA did request additional chemistry, manufacturing, and controls (CMC) data related to the drug and its manufacturing process.

Axsome intends to discuss things with the FDA and resubmit the NDA for AXS-07 after addressing the issues.

Since the target market represents a significant opportunity, a potential approval of AXS-07 should bring in significant revenues for the company.

Meanwhile, Axsome recently received FDA approval for Auvelity (AXS-05) (dextromethorphan HBr -bupropion HCl) extended-release tablets for the treatment of adults with major depressive disorder (“MDD”). This is the first FDA approval for the company for any of its pipeline candidates.

AXSM plans to launch Auvelity in the fourth quarter of 2022 in the United States. The company is likely to generate revenues from the sale of the drug.

Apart from AXS-07, Axsome’s key pipeline candidates include AXS-12 and AXS-14, which are currently being developed for multiple central nervous system indications.

Earnings of Sutro beat estimates in two of the trailing four quarters were in line in one and missed the same on the remaining occasion. The average negative earnings surprise for STRO is 1.13%.