Columbia Sportswear (COLM) Down More Than 10% in 3 Months

Columbia Sportswear Company (COLM - Free Report) has been troubled by escalated cost headwinds. The company has been seeing higher SG&A costs for a while now. Also, increased inbound freight costs have been a concern. Apart from this, volatile currency movements are a threat for the company. On its second-quarter earnings call, management lowered its guidance for 2022.

The Zacks Consensus Estimate for 2022 earnings per share (EPS) has gone down from $5.88 to $5.18 over the past 60 days. The consensus mark suggests a decline of 2.8% from the figure reported in the year-ago period. Shares of this Zacks Rank #4 (Sell) company have tumbled 12.2% in the past three months compared with the industry’s decline of 7.5%.

In the second quarter of 2022, Columbia Sportswear’s SG&A expenses escalated by 7% to $281.3 million. As a percentage of sales, the same expanded from 46.2% to 48.7%. The year-over-year rise in SG&A expenses can be attributed to higher personnel expenses stemming from the increased headcount and escalated wages. 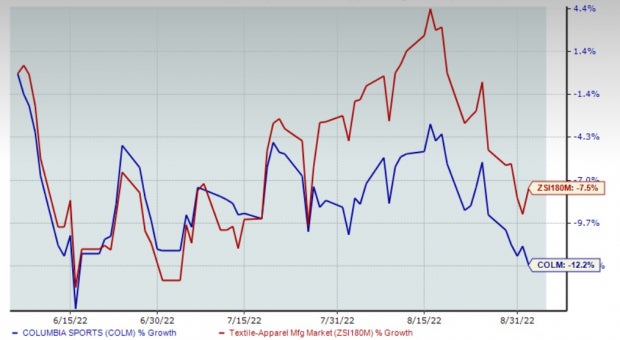 Columbia Sportswear posted second-quarter 2022 results, wherein earnings of 11 cents per share declined sharply from the 61 cents recorded in the year-ago quarter. Management stated that increased interest rates, inflation and recession jitters are hurting consumers’ and retailers’ sentiments in the United States. The company lowered its 2022 guidance, which considers the increased risk of order cancelation and more conservative direct-to-consumer expectations.

Apart from this, the guidance assumes increased promotional activity to rationalize the inventory. Additionally, supply-chain hurdles remain high and are likely to persist throughout the rest of the year. That said, management is working toward lowering supply-chain woes by taking early orders from its retail partners and placing them early with its factory associates.

Consumer Discretionary Stocks Worth a Look

The Zacks Consensus Estimate for BJ's Wholesale current financial-year sales suggests growth of around 15% from the year-ago reported number.

Hyatt, which operates as a hospitality company, currently carries a Zacks Rank #2 (Buy). H has a trailing four-quarter earnings surprise of 798.8%, on average.