Last week, China-based electric vehicle (EV) stars NIO Inc. (NIO - Free Report) , Li Auto (LI - Free Report) and XPeng Inc. (XPEV - Free Report) announced their delivery updates for August. While NIO recorded a rise in deliveries from July levels, XPeng and Li Auto witnessed a month-over-month fall in sales. A slowdown in the Chinese economy, along with supply chain snarls induced by the resurgence of COVID-19 and subsequent lockdowns, hurt the deliveries. LI was, in fact, the worst hit, with its August deliveries not just tumbling month on month but also plummeting more than 50% year over year.

Finally, EV king Tesla (TSLA - Free Report) also made it to the top stories as CEO Musk announced at an energy conference in Norway that the company’s fully self-driven cars will hit the U.S. and European market by 2022-end.

Cumulative deliveries of NIO vehicles reached 238,626 as of Aug 31, 2022. In August, NIO started boosting the production of the new ES7 SUV, a mid-large five-seater premium smart electric SUV. Featuring the NIO Technology 2.0 (NT2), it was unveiled in June and rolled out the first orders to customers in China. In August, 398 units of ES7 were delivered.

Last month, in its earnings release, XPeng announced that it envisioned third-quarter 2022 deliveries in the band of 29000-31000 units, lower than 34,422 vehicles sold in the second quarter of 2022. XPeng President Brian Gu stated that the guidance indicated the fact that the industry is gradually entering a “relatively slow season” and that store traffic is likely to be less amid COVID-19 woes.

Li Auto saw deliveries of 4,571 vehicles in August 2022. The deliveries marked a steep fall of 51% year over year. Its cumulative deliveries totaled 199,484 as of the end of the month. Sales plunged 56% from 10,422 vehicles in July. In August, Li commenced deliveries of the Li L9, its six-seater, full-size flagship SUV for families, which was launched in June.

LI stated that it was getting ready to launch Li L8, a large premium smart SUV for families, in early November, with deliveries commencing in the same month. The Li L8 model will be available in two variants, namely a six-seater and a VIP five-seater, to cater to diverse family groups. As of Aug 31, 2022, Li’s retail stores summed 265 in 118 cities, its servicing centers were 316 and Li Auto-authorized body and paint shops were operating in 226 cities.

Nikola announced plans to issue up to $400 million in new stock in an “at-the-market” offering. On its second-quarter earnings call, Nikola had indicated that it was likely to raise additional funds to ramp up production amid escalating costs. NKLA targets to deliver 300-500 production Tre BEV Trucks this year. With the aim to boost production amid rising battery costs, when it is already reeling under cash crunch and supply chain snarls (worsened by the Russia-Ukraine war), it doesn’t come as a surprise that the company had to resort to stock sale to raise capital.

As the company moves ahead with its $144 million buyout of battery supplier Romeo Power, Nikola also announced that it has begun the exchange offer to buy all outstanding shares of Romeo Power. In another development, the EV maker announced key leadership changes. Pablo Koziner has been made the president of the company’s Commercial division and Carey Mendes has been named president of the Energy unit. The presidents of both divisions are expected to report to Nikola’s president Michael Lohscheller, who will also become the CEO on Jan 1, 2023.

Tesla announced that the company is targeting the end of 2022 for its self-driving technology to be widely available in the United States and Europe markets. Tesla's existing Full Self-Driving package or FSD needs to be retrofitted to a vehicle at $15,000. The current features in the FSD package allow the vehicle to autonomously stop at signs and traffic lights, park, react to traffic while in cruise control and steer on both freeways and city streets. However, it still requires supervision from a driver. The updated version will allow vehicles to drive independently without requiring a human occupant.

Musk stated that owners of the fully autonomous Tesla vehicles might send them out as a ride-hailing service while they are at work, allowing them to earn some extra income instead of keeping the cars parked, which in turn entails a fee.The company aims to have approximately 1 million people in the FSD beta by the year-end.

The following table shows the price movement of some of the major EV players over the last week and a six-month period. 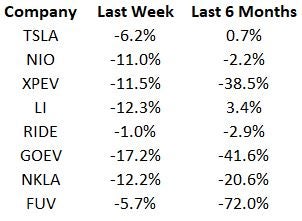