Nu Skin Enterprises, Inc. (NUS - Free Report) is bearing the brunt of prolonged COVID-associated factors, which have been marring its performance. The global integrated beauty and wellness company is battling unfavorable currency headwinds. These were reflected in NUS’s second-quarter 2022 results, with the top and the bottom line declining year over year and the latter missing the Zacks Consensus Estimate. Management trimmed the 2022 revenues and earnings view.

Shares of the Zacks Rank #4 (Sell) stock have slumped 15.8% in the past three months compared with the industry’s 10% decline.

In second-quarter 2022, Nu Skin’s performance was impacted by extended pandemic-led factors in Mainland China, sluggishness in the EMEA region due to the ongoing conflict, muted global economic conditions weighing on emerging markets and the strengthening of the U.S. dollar. Quarterly adjusted earnings of 77 cents a share declined from $1.15 reported in the year-ago quarter. Revenues of $560.6 million fell 20% on a reported basis. On a constant-currency (cc) basis, revenues declined 15%. Sales leaders were down 24% year over year to 50,085. Nu Skin’s customer base fell6% to 1,380,615. The company’s paid affiliates were down 16% to 242,133.

Nu Skin believes that tough macroeconomic factors will continue to impact business operations in the short term. In this regard, continued economic uncertainty, prolonged COVID-associated factors, unfavorable currency rates and geopolitical conflicts are threats. As a result, the company trimmed full-year revenues and earnings view. Nu Skin anticipates 2022 revenues to be $2.33-$2.41 billion, calling for an 11-14% decline from the year-ago period’s reported figure. The company had earlier expected revenues to be $2.51 billion to $2.62 billion.

Management now expects 2022 adjusted earnings per share (EPS) in the range of $3.30 to $3.60, excluding restructuring and impairment charges and charges associated with the fourth-quarter 2021 exit from Grow Tech. The current projection suggests a decline from adjusted earnings of $4.14 reported last year. Earlier, management had guided earnings in the bracket of $3.60-$3.90 per share. 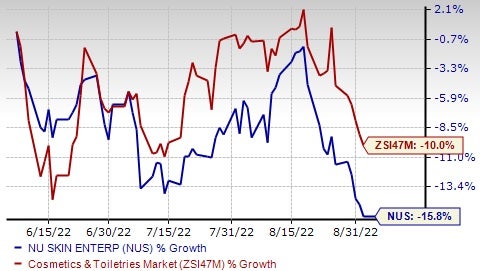 For the third quarter, Nu Skin expects revenues between $550 million and $590 million. The current revenue projection suggests an 8-13% decline from the year-ago quarter’s level. The company guided third-quarter adjusted earnings to be 70 cents to 85 cents a share, calling for a decline from 97 cents reported in the year-ago period.

That being said, let’s see if these upsides can help Nu Skin counter the earlier-mentioned hurdles.

Inter Parfums is engaged in the manufacturing, distribution and marketing of a wide range of fragrances and related products. IPAR currently sports a Zacks Rank #1 (Strong Buy). You can see the complete list of today’s Zacks #1 Rank stocks here.

The Zacks Consensus Estimate for Inter Parfums’ current financial-year sales and EPS suggests growth of 14.9% and 18.2%, respectively, from the year-ago period’s reported figures. IPAR has a trailing four-quarter earnings surprise of 31.1%, on average.

e.l.f. Beauty, a cosmetic company, currently has a Zacks Rank #2 (Buy). ELF has a trailing four-quarter earnings surprise of almost 77%, on average.