Axsome Therapeutics’ (AXSM - Free Report) shares have surged 118.4% in the past three months against the industry’s decline of 4.7%. 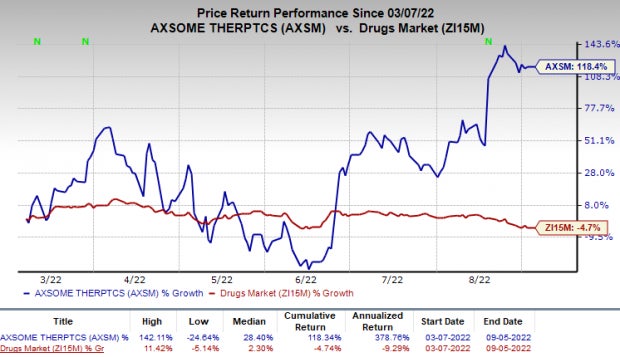 Jazz’s Sunosi is a drug approved as a treatment to improve wakefulness and reduce excessive daytime sleepiness in adults with narcolepsy or obstructive sleep apnea. Sunosi is currently marketed in the United States, Europe and several other countries.

The Sunosi acquisition strengthened Axsome’s neuro portfolio and transformed the company into a revenue-generating entity.

Axsome also intends to further develop Sunosi to treat attention-deficit/hyperactivity disorder (ADHD), with a phase III study to be initiated in the fourth quarter of 2022.

Recently, in August, the stock further skyrocketed because of the FDA approval of Axsome’s lead pipeline candidate AXS-05, with the trade name Auvelity, for the treatment of adults with major depressive disorder (MDD), making it the first approved drug in its portfolio.

Post approval, Auvelity became the first and only oral rapid-acting drug approved for the treatment of MDD, exhibiting statistically significant antidepressant efficacy as against placebo, starting at week one.

The company has already started the commercialization process of Auvelity and expects to launch it in the United States in the fourth quarter of 2022.

The company also initiated its phase III EMERGE study for another one of its pipeline candidates AXS-07, for acute migraine treatment.

In September 2021, Axsome submitted a new drug application (NDA) with the FDA for AXS-07, which received a complete response letter (CRL) from the FDA this year in April, based on additional chemistry, manufacturing, and controls (CMC) issues.

The EMEGRE study is a regulatory requirement and is being conducted solely to clarify the clinical profile of AXS-07.

Regarding the CRL, Axsome intends to hold a Type A meeting with the FDA and resubmit the NDA for AXS-07 after addressing the CMC issues. A potential timing for the resubmission will be provided post consultation with the FDA.

A potential approval for AXS-07 is anticipated to bode well with Axsome, positively affecting its top line, given the immense potential of its target market.

Apart from AXS-07, Axsome also has several promising pipeline candidates in its portfolio.

Axsome is evaluating AXS-12 (reboxetine) for the treatment of narcolepsy in a phase III SYMPHONY study, whose top-line data is expected by the first half of 2023. Another open-label long-term safety extension study for AXS-12 has also been initiated.

Another one of its pipeline candidates, AXS-14 (esreboxetine), is being developed for the treatment of fibromyalgia. Based on positive data from phase II and III studies evaluating AXS-14, Axsome intends to file an NDA for the candidate in 2023.

Earnings of Pliant beat estimates in two of the trailing four quarters, were in line in one and missed the same on the remaining occasion. The average earnings surprise for PLRX is 0.90%.

Earnings of Sesen Bio missed estimates in all of the trailing four quarters. The average earnings surprise for SESN is 89.49%.