However, the company is undertaking efforts, including non-critical expense reductions, hiring freeze and reduction in capital expenditure, to strengthen its financial position. Management paused its quarterly cash dividend for now. The company continued to gain from the execution of the “Real Power. Real Growth.” plan.

Shares of the Zacks Rank #5 (Strong Sell) company have plunged 54.2% year to date compared with the industry’s decline of 43.1%. 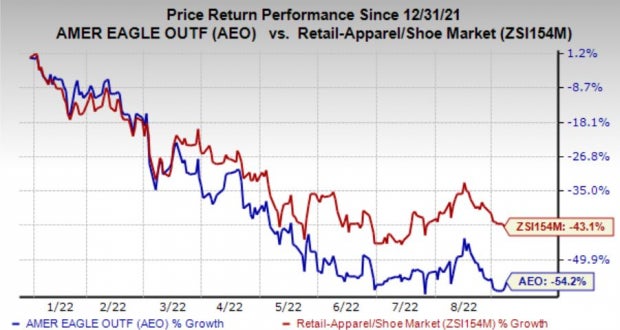 Total net revenues of $1,198 million remained almost flat year over year and lagged the Zacks Consensus Estimate of $1,199 million. Our estimate for the top line was $1,223.4 million. Revenue growth was aided by a 2-percentage-point contribution from supply-chain acquisitions. The metric advanced 15% from the pre-pandemic level.

The company’s digital revenues were down 6% year over year, while the same advanced 60% from the pre-pandemic levels (second-quarter fiscal 2019). Digital revenues accounted for 33% of the total revenues, driven by its mobile app, which is now the largest source of revenues in the digital channel.

Store revenues fell 2% year over year, driven by continued channel migration back to stores. Store sales were up 1% from the pre-pandemic levels.

In the quarter, the company launched a mobile point-of-sale system in its North America stores through which customers can check out or return items through a store associate. The move is likely to expedite transaction speed and minimize wait time, particularly in peak fall and holiday selling seasons.

The gross profit dropped 26% year over year to $370 million, while the gross margin contracted 1,120 basis points (bps) to 30.9%. This mainly resulted from higher markdown impacts of 750 bps, a 200-bps impact of freight costs and a 60-bps impact of the recent supply-chain business acquisition. The gross margin was also impacted by increased rent and delivery expenses, slightly offset by lower incentive compensation accruals.

Selling, general and administrative (SG&A) expenses rose 5% year over year to $308 million. As a percentage of sales, S&A expenses increased 110 bps to 25.7% due to a rise in store wages, increased corporate compensation, professional services and advertising expenses. This was partly negated by lower incentive compensation accruals.

Operating income in the fiscal second quarter was $14 million, down significantly from $168 million in the year-ago quarter. Operating income included a $25-million headwind from higher freight costs, a $30-million impact from higher end-of-season selloffs and a $9-million loss from supply-chain acquisitions. The operating margin contracted 1,290 bps year over year to 1.2%.

For the Aerie brand, operating income of $11.8 million compared unfavorably with the year-ago quarter’s $70.6 million. The AE brand’s operating income declined 45.1% year over year to $109.1 million.

American Eagle ended second-quarter fiscal 2022 with cash and cash equivalents of $98.2 million. Total shareholders’ equity as of Apr 30, 2022, was $1,372.9 million. The company had total liquidity, including available credit, of $453 million at the quarter end.

AEO bought back 17 million shares as part of its share repurchase program worth $200 million. Management paid a dividend of 18 cents per share in the quarter.

In second-quarter fiscal 2022, the company opened 4 AE, 23 Aerie and one Todd Snyder stores, while it closed 9 AE and one Aerie stores. The store openings for the Aerie brand included stand-alone as well as Aerie OFFLINE side-by-side formats. For AE, the company is on track with its target of rightsizing the brand store footprint.

Management has been witnessing sluggish demand trends. Quarter to date, brand revenues have declined in the high-single digits due to exceptional growth and a record back-to-school season last year. The gross margin is likely to be in the mid-30s and low-30s for the third and fourth quarters of fiscal 2022, respectively. This is mainly due to higher markdowns from increased promotions and seasonal clearance cadence being more weighted to the fourth quarter.

In a bid to mitigate the hurdles, American Eagle has expanded expense cuts in store payroll, corporate, professional services and advertising. The move is expected to generate cost savings of $100 million on an annual basis compared with the prior target of $60 million. As a result, SG&A expenses are anticipated to be flat year over year in the second half of fiscal 2022 compared with the earlier mentioned low to mid-single-digit growth.

The company cleared all excess spring and summer goods. It entered the fiscal third quarter with better inventory levels, and fresh back-to-school and fall merchandise.

The Zacks Consensus Estimate for Dollar General’s current financial-year revenues and EPS suggests growth of 10% and 13.4%, respectively, from the year-ago reported figure. Dollar General has a trailing four-quarter earnings surprise of 2.8%, on average.

Dillard's, which operates retail department stores, currently sports a Zacks Rank #1. The company has a trailing four-quarter earnings surprise of nearly 215%, on average.

The Zacks Consensus Estimate for Dillard's current financial-year sales suggests growth of 6% from the year-ago period. DDS has an expected EPS growth rate of 14.6% for three to five years.

Ulta Beauty, which operates as a retailer of beauty products, currently sports a Zacks Rank #1. Ulta Beauty has a trailing four-quarter earnings surprise of 32.8%, on average. ULTA has an expected EPS growth rate of 11.9% for three to five years.