Shares of GameStop Corp. (GME - Free Report) increased 11.7% during after-hours trading on Sep 7, 2022, after it posted a narrower-than-expected second-quarter fiscal 2022 loss. The company also announced its partnership with FTX US, one of the largest cryptocurrency exchanges.

GameStop has been undertaking initiatives to diversify the business and become a technology-driven organization. The Grapevine, TX-based company launchedits non-fungible token (NFT) marketplace to aid gamers, creators, collectors and others in buying, selling and trading NFTs. Management modernized and solidified its systems via the implementation of SAP.

The company reported net sales of $1,136 million, which missed the Zacks Consensus Estimate of $1,254.7 million. The metric declined from $1,183.4 million reported in the year-ago quarter. Management highlighted that sales attributable to new and expanded brand relationships remained solid in the quarter.

Adjusted SG&A expenses stood at $388.4 million, up from $372.3 million reported in the year-ago quarter. 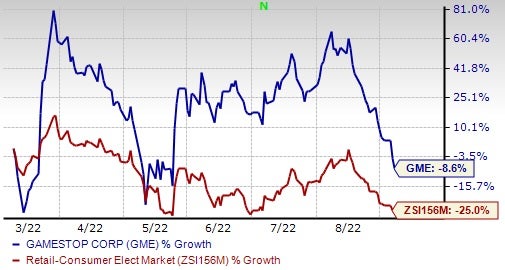 The company unveiled its partnership with FTX US (FTX), which is aimed at introducing more GameStop customers to FTX’s community and marketplaces. GameStop is partnering with FTX on new e-commerce and online marketing efforts. It will also start carrying FTX gift cards across select stores.

The Zacks Rank #3 (Hold) company ended the quarter with cash and cash equivalents of $908.9 million, net long-term debt of $32.1 million and stockholders’ equity of $1,343.5 million. Inventory was $734.8 million at the end of the reported quarter compared with $596.4 million at the close of the same quarter last year. The company maintains enough in-stock levels to meet customer demand and mitigate supply chain challenges.

GME’s stock has declined 8.6% in the past six months compared with the industry’s fall of 25%.

Dillard's, which operates retail department stores, sports a Zacks Rank #1 (Strong Buy). The company has a trailing four-quarter earnings surprise of nearly 215%, on average. You can see the complete list of today’s Zacks #1 Rank stocks here.

The Zacks Consensus Estimate for Dillard's current financial year sales suggests growth of 4.8% from the year-ago period. DDS has an expected EPS growth rate of 14.6% for three to five years.

Ulta Beauty, which operates as a retailer of beauty products, sports a Zacks Rank #1. Ulta Beauty has a trailing four-quarter earnings surprise of 32.8%, on average.

The Zacks Consensus Estimate for Ulta Beauty’s current financial year sales suggests growth of 13.7% from the year-ago reported number. ULTA has an expected EPS growth rate of 11.9% for three to five years.

Kroger, which provides an array of goods ranging from household essentials, groceries and electronics to toys and apparel for men, women and kids, currently carries a Zacks Rank #2 (Buy). KR has a trailing four-quarter earnings surprise of 20.3%, on average.

The Zacks Consensus Estimate for Kroger’s current financial year sales suggests growth of 7.6% from the year-ago period’s reported figures. KR has an expected EPS growth rate of 11.3% for three-five years.

Viracta (VIRX) Up on Orphan Drug Tag for Peripheral Lymphoma