Alzheimer’s disease is the most common form of dementia. It is a progressive neurodegenerative disorder causing cognitive decline and other behavioral and psychological symptoms, including agitation. Agitation as a symptom is reported by approximately 70% of AD patients. Presently, there is no FDA-approved treatments for AD agitation.

ADVANCE-2 phase III study is a randomized, double-blinded, placebo-controlled study conducted on approximately 350 patients for five weeks to determine the safety and efficacy of AXS-05 in AD agitation. The primary efficacy measure is the Cohen-Mansfield Agitation Inventory (CMAI).

The target market represents a massive opportunity. If the study progresses well, a potential label expansion of AXS-05 will majorly boost Axsome’s portfolio.

Shares of Axsome have returned 62% in the year-to-date period against the industry’s decline of 21.7% 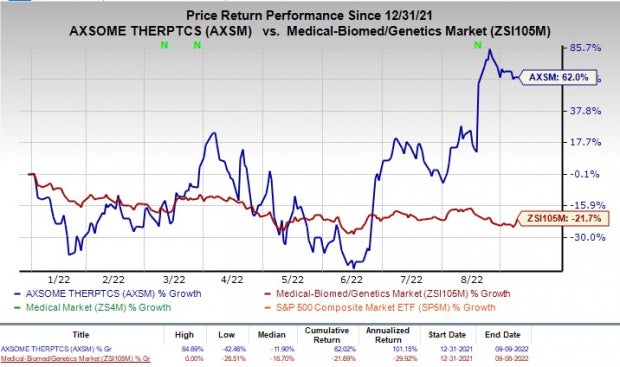 AXS-05, marketed by the trade name Auvelity, was approved by the FDA for the treatment of Major depressive disorder (MDD) in August, making it the first approved drug in Axsome’s portfolio. AXSM intends to launch Auvelity in the United States in the fourth quarter of 2022, post which the company is likely to generate revenues from the sale of the drug.

Axsome is also developing AXS-05 to aid smoking cessation treatment, and a phase II study on the same indication has been completed.

Axsome also has a late-stage pipeline candidate AXS-07 in its portfolio being developed for CNS disorders. Only last week, the company enrolled its first patient in the EMERGE phase III study evaluating AXS-07 as a potential treatment for acute migraine to bring more clarity to the candidate’s clinical profile.

AXS-07 is also on the verge of a FDA approval. Its new drug application (NDA) of AXS-07 for the acute treatment of migraine received a complete response letter (CRL) from the FDA on chemistry, manufacturing, and controls (CMC) grounds. But the company intends to refile its NDA post a CMC clean-up guided by an FDA consultation.

Other pipeline candidates of Axsome include AXS-12 and AXS-14, which are being evaluated for multiple CNS disorders.

Earnings of Sesen Bio missed estimates in all of the trailing four quarters. The average negative earnings surprise for SESN is 89.49%.

Earnings of Sutro beat estimates in two of the trailing four quarters, were in line in one and missed the same on the remaining occasion. The average negative earnings surprise for STRO is 1.13%.

Here's Why Investors Should Retain Abbott (ABT) Stock Now