Here's Why You Should Retain Cardinal Health (CAH) Stock Now

Cardinal Health Inc. (CAH - Free Report) is well-poised for growth on the back of a diversified product portfolio, acquisition-driven strategy and a robust pharmaceutical segment. However, margin contraction remains a concern.

The company — with a market capitalization of $19.34 billion — is a nationwide drug distributor and a provider of services to pharmacies, healthcare providers and manufacturers. It anticipates earnings to improve 4.6% over the next five years. Cardinal Health's earnings yield is 7.4% compared with the industry's 4.3%. 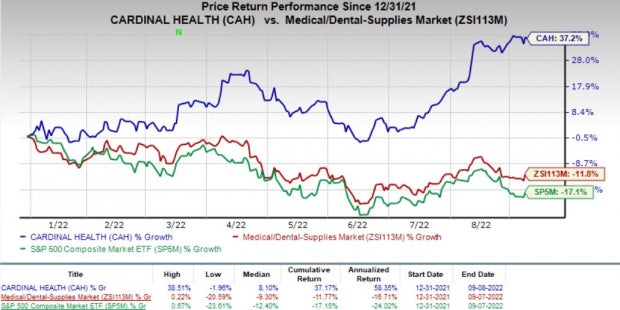 Cardinal Health's Medical and Pharmaceutical offerings provide it with a competitive edge in its niche area of operations. It offers industry expertise through an expanding portfolio of safe products.

The company pursues an acquisition-driven strategy and remains committed to investment in key growth businesses to gain market traction and bolster profits.

In the fourth quarter of fiscal 2022, pharmaceutical revenues amounted to $43.3 billion, up 13.1% on a year-over-year basis. The performance reflects branded pharmaceutical sales growth from Pharmaceutical Distribution and Specialty Solutions customers.

On the fiscal fourth-quarter 2022 earnings call, the company stated that it has been witnessing continued commercial momentum with Navista TS.

In June, Cardinal Health tied up with Zipline and began long-range drone deliveries in North Carolina. The latest partnership between the two companies is aimed at transforming patients’ experience while improving care delivery. It is aimed at mitigating the inventory stock-out risks and lessening the barriers for patients accessing necessary products, especially in difficult-to-reach areas. During the same month, CAH expanded its warehouse footing by adding a new distribution center in the Columbus, OH, area to support its at-Home Solutions business. This move is likely to provide a boost to Cardinal Health’s pharmaceutical distribution capability, which is included as one of the services in the Pharmaceutical business.

What's Weighing on the Stock?

In the fourth quarter of fiscal 2022, gross profit increased 9% year over year to $1.61 billion. However, gross margin contracted 6 basis points year over year, which reflects rising costs. The inflationary pressure is likely to continue in the next few quarters. The company reported a significant decline in operating income to $36 million during the last reported quarter compared with $162 million in the year-ago quarter.

With respect to the Medical segment, revenues fell 11% to $3.8 billion due to the divestiture of the Cordis business. The company reported a loss of $16 million for the Medical segment. The company recorded a loss during the quarter, primarily due to net inflationary impacts and global supply chain restrictions in products and distribution. These macro headwinds are likely to continue for the rest of the calendar year 2022.

For fiscal 2023, the Zacks Consensus Estimate for revenues is pegged at $193.31 billion, indicating an improvement of 6.7% from the previous year's reported number.

The same for adjusted earnings per share stands at $5.27, suggesting a rise of 4.2% from the year-ago reported figure.

AMN Healthcare, sporting a Zacks Rank #1 (Strong Buy) at present, has an estimated long-term growth rate of 3.2%. AMN’s earnings surpassed the Zacks Consensus Estimate in all the trailing four quarters, the average beat being 15.7%.

AMN Healthcare has gained 4.4% compared with the industry’s 15.9% fall so far this year.

ShockWave Medical has surged 73.6% against the industry’s 12.6% fall so far this year.

McKesson, carrying a Zacks Rank #2 (Buy) at present, has an estimated long-term growth rate of 9.9%. MCK’s earnings surpassed estimates in three of the trailing four quarters and missed the same in one, the average beat being 13%.

McKesson has gained 33.8% against the industry’s 5% fall so far this year.