The change in guidance for the Medical segment primarily reflects the impact of the company’s ongoing simplification efforts that are likely to result in approximately $25 million in inventory charges related to the gloves portfolio. The $25 million charge includes the negative impact of the company’s decision to stop distributing certain disposable gloves to non-healthcare industries like restaurant supply.

Cardinal Health’s Medical segment has been facing declining sales following the divestiture of the Cordis business in 2021. Moreover, a decrease in products and distribution volumes hurt the segment’s top line during fourth-quarter fiscal 2022. During the same quarter, the segment’s bottom line was hurt primarily due to net inflationary impacts and global supply chain restrictions in products and distribution. The Medical segment recorded a loss of $16 million in the fourth quarter fiscal 2022. 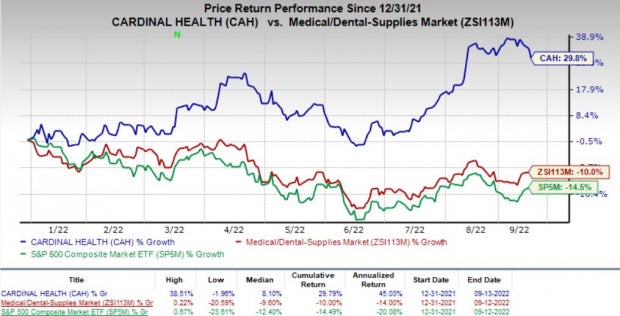 Although Cardinal Health lowered its income guidance for the Medical segment, the company maintained its total adjusted earnings for fiscal 2023. The company continues to expect its adjusted earnings per share (EPS) for the year in the range of $5.05 to $5.40. This reflects that although the company is expecting a wider loss from its medical segment, strong demand for its pharmaceutical products will help it to more than offset the loss.

AMN Healthcare, sporting a Zacks Rank #1 (Strong Buy) at present, has an estimated long-term growth rate of 3.2%. AMN’s earnings surpassed the Zacks Consensus Estimate in all the trailing four quarters, the average beat being 15.7%.

AMN Healthcarehas lost 15.3% compared with the industry’s 26.2% fall so far this year.

ShockWave Medical has gained 61.3% against the industry’s 26.7% fall so far this year.

McKesson, carrying a Zacks Rank #2 (Buy) at present, has an estimated long-term growth rate of 9.9%. MCK’s earnings surpassed estimates in three of the trailing four quarters and missed the same in one, the average beat being 13%.

McKesson has gained 40% against the industry’s 10% fall so far this year.