Shares of Syros Pharmaceuticals (SYRS - Free Report) were up almost 5% during market hours on Sep 13 after the company announced that its pipeline candidate SY-5609 was granted Orphan Drug designation by the FDA to treat pancreatic cancer.

The FDA grants Orphan Drug designation to a drug or biologic intended to treat a rare disease or condition, which generally includes one that affects fewer than 200,000 individuals in the United States. The designation also involves incentives, including financial aid for clinical testing and a seven-year marketing exclusivity in the event of regulatory approval.

Shares of Syros have plunged 76.5% compared with the industry’s 20.1% decline in the year-to-date period.’ 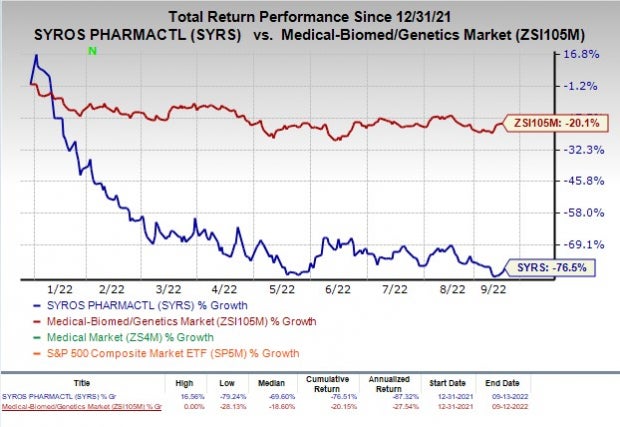 SY-5609, a highly selective and potent oral inhibitor of cyclin-dependent kinase 7 (“CDK7”), is currently being evaluated in a phase I study, in combination with chemotherapy, for treating pancreatic cancer patients.

One arm of the expansion study will evaluate SY-5609 in combination with Eli Lilly’s (LLY - Free Report) Gemzar (gemcitabine) in patients in first or second relapse who have progressed following treatment with the chemotherapy regimen Folfirinox.

Another arm will be exploring SY-5609 in combination with Eli Lilly’s Gemzar (gemcitabine) and Calgene’s [now a part of Bristol-Myers’ (BMY - Free Report) ] Abraxane (nab-paclitaxel) in patients following the first relapse after Folfirinox.  Too long sentence

The study will evaluate the efficacy measures such as disease control rate and progression-free survival of SY-5609 with both combinations in patients. Results from the safety lead-in portion of the study are expected by the end of 2022.

Apart from SY-5609, the company has two more clinical-stage product candidate, including its lead candidate, tamibarotene and SY-2101.

Tamibarotene is currently being evaluated in a phase II study in combination with Bristol-Myers’ Onureg (azacitidine) in patients with higher-risk myelodysplastic syndrome. It is also being developed in combination with venetoclax and Onureg (azacitidine) in patients with acute myeloid leukemia (AML), who are unsuitable for standard intensive chemotherapy.

The other candidate, SY-2101, is being evaluated in a phase II study in patients with newly-diagnosed acute promyelocytic leukemia (APL).