Akero Therapeutics (AKRO) Up on Positive Data from NASH Study

NASH is a progressive form of non-alcoholic fatty liver disease (NAFLD), characterized by excessive fat buildup in the liver, accompanied by inflammation and fibrosis, which may progress to cirrhosis, liver failure, cancer and death.

In the study, 39% of patients who received EFX in the 28mg dose cohort and 41% in the 50mg cohort experienced at least one-stage improvement in fibrosis without their NASH deteriorating compared with 20% for the placebo arm, which was the primary endpoint.

Further, 47% of the patients treated with 28mg and 76% with 50mg achieved NASH resolution, without their fibrosis worsening, compared with 15% for placebo, which made up the study’s secondary endpoint.

Also, 29% of patients in the 28mg cohort and 41% in the 50mg cohort achieved both NASH resolution and fibrosis improvement, compared with 5% of those treated with placebo.

EFX was generally well-tolerated in the subjects and maintained its safety profile. Only five patients who received EFX dropped out of the study due to side effects.

Shares of Akero returned 37.3% in the year-to-date period against the industry’s decline of 20.2%. 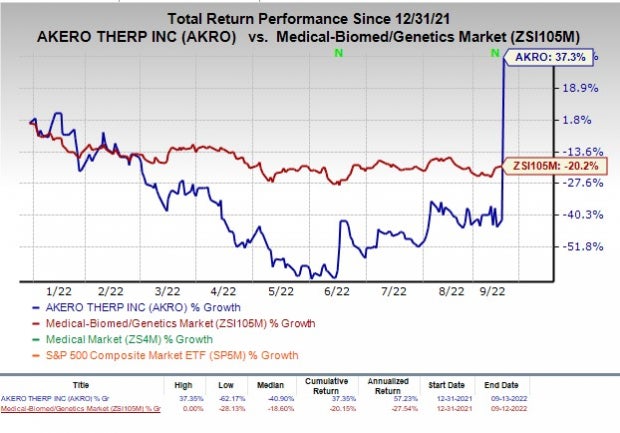 Currently, the company is also evaluating EFX in a phase IIb SYMMETRY study in biopsy-confirmed NASH patients with compensated cirrhosis (F4), Child-Pugh class A. Akero intends to report results from the SYMMETRY study in the second half of 2023.

Quite a few players are trying to successfully develop a treatment for the same.

Intercept Pharmaceuticals (ICPT - Free Report) is evaluating obeticholic acid for NASH. However, the company suffered a setback as it received a complete response letter (CRL) from the FDA for its new drug application (NDA) of obeticholic acid. The FDA stated that obeticholic acid in its present form could not be approved as a treatment for NASH.

In July, Intercept announced positive top-line data from a new interim analysis of its ongoing pivotal phase III REGENERATE study, evaluating obeticholic acid in NASH. Based on the study’s results, Intercept has already held its pre-submission meeting with the FDA and intends to resubmit its NDA for obeticholic acid to treat liver fibrosis due to NASH by the end of 2022.

Another company, Viking Therapeutics (VKTX - Free Report) , is developing its lead candidate, VK2809, for biopsy-confirmed NASH and fibrosis. VK2809 is currently being evaluated in a phase IIb study in patients with NASH.  Viking expects to complete enrollment and report initial data on the primary endpoint by the end of 2022.