The Detroit Auto Show is again back in the city after a more than three-year hiatus, allowing automakers to unveil their latest products. Ford (F - Free Report) has hogged the limelight as its new range of vehicles created a buzz. The event, being held from Sep 17-Sep 25, was kick-started by an outdoor event held by Ford, named The Stampede, as part of the Detroit Auto Show 2022.

The highlight of the event was the launch of the much-awaited seventh-generation Mustang Mach-E, code-named S650. It debuted on Sep 14 as owners waited with bated breath. This was a visual treat for car owners and sports enthusiasts.

The legendary muscle car is a redesigned version but maintains the character design of a shortened height of the Mustang. The exterior and interior have recieved an overhaul. The vehicle will be available with an Ecoboost powertrain and a 5.0-liter V8. Four versions, namely a standard Mustang, a GT, GT convertible and a Dark Horse Trim, will be sold.

The new model has been styled to look sharper and sleeker and is equipped with enhanced headlamps and tail lamps. It, however, maintains its lattice design with a Pony badge and a long-sloping hood. Ford has introduced changes to the engine design, like a dual air intake box and a dual-throttle body.

However, what came as a surprise was that the Mustang continues to be gas-powered, despite the automaker having pledged an investment of $50 million in new electric vehicles (EVs) in the upcoming years. It is likely that along with EV investments, Ford is focused on expanding sales across its traditional business, so there is a chance that the automaker is sticking to conventional energy-powered vehicles.

Apart from the iconic Mustang, noteworthy launches including the F-150 Raptor R, fresh lineup of Bronco models and Maverick truck were unveiled.

Meanwhile, in a bid to strengthen its electrification initiatives, Ford has approached nearly 3,000 dealers to invest in upgrades to sell all-electric vehicles. It is offering the option to become "EV-certified" with investments of $500,000 or $1.2 million.

At a time when the auto industry is facing the brunt of a long-drawn semiconductor crisis and the ongoing geopolitical turmoil from the Ukraine conflict, with manufacturing efficiencies gnawing at production timelines, a show of this stature might help provide the industry with new vigor.

Shares of Ford have increased 14.8% over the past year compared to its industry’s rise of 5.2%. 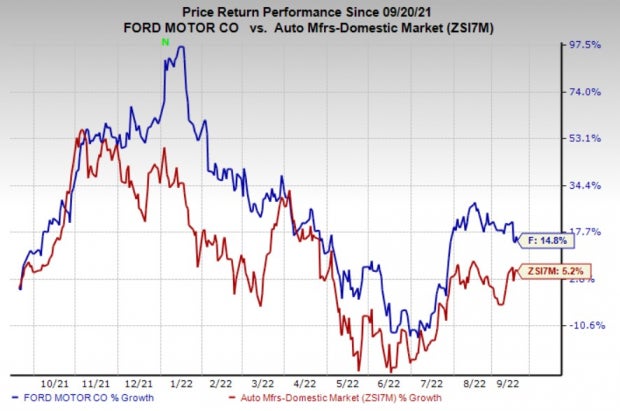 Yamaha’s earnings beat the Zacks Consensus Estimate in three of the trailing four quarters and missed in one. YAMHF pulled off a trailing four-quarter earnings surprise of 47.95%, on average. The stock has declined 25.9% over the past year.

BorgWarner has an expected earnings rate of 2.9% for the current year. The Zacks Consensus Estimate for current-year earnings has been kept constant in the past 30 days.

BorgWarner’s earnings beat the Zacks growth Consensus Estimate in all the trailing four quarters. BWA pulled off a trailing four-quarter earnings surprise of 29.45%, on average. The stock has declined 10.6% in the past year.

Tesla has an expected earnings growth rate of 76.5% for the current year. The Zacks Consensus Estimate for current-year earnings has been revised 1% upward in the past 30 days.

Tesla’s earnings beat the Zacks Consensus Estimate in all the trailing four quarters. TSLA pulled off a trailing four-quarter earnings surprise of 32.17%, on average. The stock has increased 24.7% in the past year.