Ralph Lauren Corporation (RL - Free Report) rose 3% on Sep 19, 2022, as investors applauded the company’s update on its strategic growth plan — "Next Great Chapter: Accelerate". On its investor day, RL brought forward the key aspects of its Next Great Chapter: Accelerate strategic growth plan and outlined its long-term financial targets for the next three years.

Ralph Lauren has significantly transformed its business, backed by the “Next Great Chapter” plan, which was announced in June 2018. This is now followed by "Next Great Chapter: Accelerate," focused on delivering sustainable long-term growth and value creation. Through the accelerated plan, the company is likely to continue building on its brand position; expand its distinctive, timeless products and experiences across multiple categories; and increase its presence in key cities across the globe.

While RL reiterated its recently provided fiscal 2023 guidance, it outlined the financial growth targets for the next three years from a base of fiscal 2022 through fiscal 2025. For the next three years, the company anticipates a compound annual revenue growth rate of mid to high-single digits in constant currency. It expects the constant-currency operating margin to exceed the revenue guidance, expanding to at least 15% by the end of fiscal 2025. Growth is likely to be driven by modest gross margin expansion and operating expense leverage, along with continued investments in the company’s long-term strategic priorities.

Ralph Lauren expects the capital expenditure to be 4-5% of net revenues annually through fiscal 2025. The company remains committed to rewarding shareholders over the next three years by returning the excess free cash flow to them. It plans to return $2 billion to shareholders on a cumulative basis through fiscal 2025 in the forms of dividend payouts and share buybacks.

Ralph Lauren hiked its quarterly dividend 9% to 75 cents per share at the beginning of fiscal 2023. This represents an annualized dividend of $3 per share. The company has $1.4 billion remaining under its current share repurchase authorization.

The operating margin is forecast to be 14-14.5% on a constant-currency basis. Notably, RL reported an operating margin of 13.1% on a 52-week comparable basis and 13.4% on a 53-week basis in the last year. The gross margin, on a 52-week comparable basis, is envisioned to expand 30-50 bps on a constant-currency basis, driven by solid AUR growth and positive product mix, which is expected to more than offset higher freight and product cost inflation. However, the unfavorable currency is likely to hurt the metric by 150 bps. 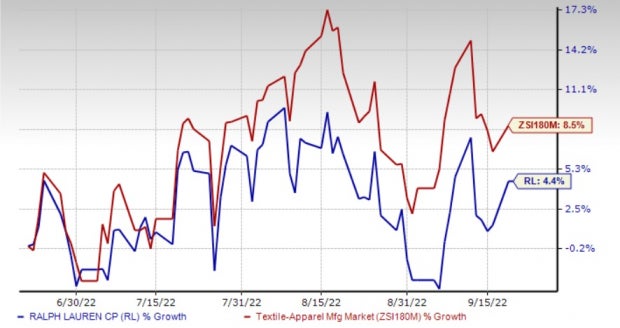 The company’s guidance for fiscal 2023 and the long term considers the possible impacts of the supply-chain conditions, inflationary pressures, foreign currency movement, the war in Ukraine, and COVID-19 variants and other COVID-related disruptions.

The Zacks Rank #4 (Sell) stock has gained 4.4% in the past three months compared with the industry’s growth of 6.6%.

Oxford Industries is an apparel company that designs, sources, markets and distributes products bearing the trademarks of its owned and licensed brands. It currently has a Zacks Rank #2 (Buy). OXM has a trailing four-quarter earnings surprise of 91.1%, on average.

lululemon, a yoga-inspired athletic apparel company, currently has a Zacks Rank #2. LULU has a trailing four-quarter earnings surprise of 10.4%, on average. The company has an expected EPS growth rate of 20% for three to five years.

The Zacks Consensus Estimate for lululemon’s current financial year’s sales and earnings per share suggests growth of 26.6% and 26.7%, respectively, from the year-ago period's reported numbers.

Caleres, a footwear retailer and wholesaler, presently has a Zacks Rank #2. CAL has a trailing four-quarter earnings surprise of 34.9%, on average.

The Zacks Consensus Estimate for Caleres’ current financial year’s sales and earnings suggests growth of 5.6% and 0.9% from the year-ago period’s reported numbers, respectively.