Here is What to Know Beyond Why Cisco Systems, Inc. (CSCO) is a Trending Stock

Cisco Systems (CSCO - Free Report) has recently been on Zacks.com's list of the most searched stocks. Therefore, you might want to consider some of the key factors that could influence the stock's performance in the near future.

Shares of this seller of routers, switches, software and services have returned -10.2% over the past month versus the Zacks S&P 500 composite's -8.7% change. The Zacks Computer - Networking industry, to which Cisco belongs, has lost 12.4% over this period. Now the key question is: Where could the stock be headed in the near term?

Cisco is expected to post earnings of $0.84 per share for the current quarter, representing a year-over-year change of +2.4%. Over the last 30 days, the Zacks Consensus Estimate remained unchanged.

The consensus earnings estimate of $3.53 for the current fiscal year indicates a year-over-year change of +5.1%. This estimate has remained unchanged over the last 30 days.

For the next fiscal year, the consensus earnings estimate of $3.79 indicates a change of +7.3% from what Cisco is expected to report a year ago. Over the past month, the estimate has remained unchanged.

Having a strong externally audited track record, our proprietary stock rating tool, the Zacks Rank, offers a more conclusive picture of a stock's price direction in the near term, since it effectively harnesses the power of earnings estimate revisions. Due to the size of the recent change in the consensus estimate, along with three other factors related to earnings estimates, Cisco is rated Zacks Rank #3 (Hold). 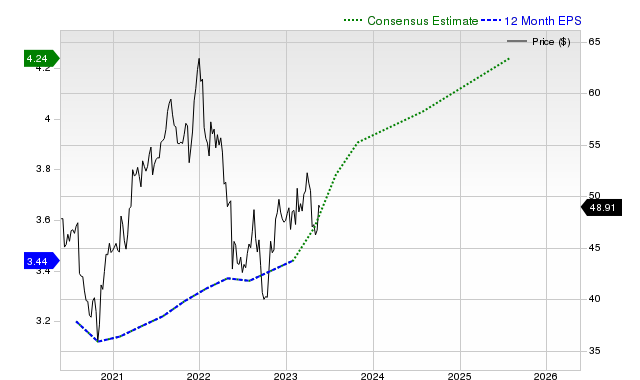 In the case of Cisco, the consensus sales estimate of $13.31 billion for the current quarter points to a year-over-year change of +3.2%. The $54.07 billion and $56.1 billion estimates for the current and next fiscal years indicate changes of +4.9% and +3.8%, respectively.

Cisco reported revenues of $13.1 billion in the last reported quarter, representing a year-over-year change of -0.2%. EPS of $0.83 for the same period compares with $0.84 a year ago.

Compared to the Zacks Consensus Estimate of $12.75 billion, the reported revenues represent a surprise of +2.75%. The EPS surprise was +1.22%.

The company beat consensus EPS estimates in each of the trailing four quarters. The company topped consensus revenue estimates two times over this period.

Cisco is graded B on this front, indicating that it is trading at a discount to its peers. Click here to see the values of some of the valuation metrics that have driven this grade.

The facts discussed here and much other information on Zacks.com might help determine whether or not it's worthwhile paying attention to the market buzz about Cisco. However, its Zacks Rank #3 does suggest that it may perform in line with the broader market in the near term.