Why You Should Add Reliance Steel (RS) Stock to Your Portfolio

We are optimistic about its prospects and believe that the time is right to add the stock to the portfolio as it looks poised to carry the momentum ahead.

Let’s delve deeper into the factors that make this Zacks Rank #2 (Buy) stock an attractive choice for investors.

Shares of Reliance Steel have gained 23.1% over a year against the 6.4% decline of its industry. It has also outperformed the S&P 500’s roughly 13% decline over the same period. 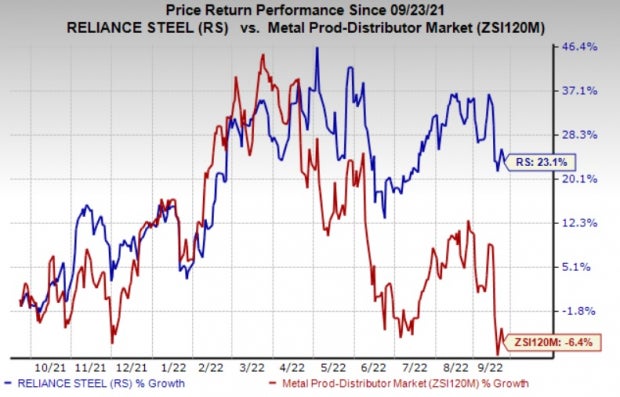 Over the past two months, the Zacks Consensus Estimate for earnings for 2022 for Reliance Steel has increased 13.4%. The consensus estimate for 2023 earnings has also been revised 9% upward over the same time frame. The favorable estimate revisions instill investor confidence in the stock.

Reliance Steel’s earnings outpaced the Zacks Consensus Estimate in each of the trailing four quarters, the average being 13.4%.

Reliance Steel is gaining from strong underlying demand in its major markets. It remains cautiously optimistic about the business environment in 2022 and sees robust demand in the majority of its end markets.

Reliance Steel is also seeing strength in semiconductors and energy markets. Demand also remains steady for the toll processing services that it provides to the automotive market despite the impact of global microchip shortages on production levels. Demand also recovered in commercial aerospace during the second quarter.

The company has also been following an aggressive acquisition strategy for a while as part of its core business policy to drive operating results. Its latest acquisitions of Rotax Metals, Admiral Metals and Nu-Tech Precision Metals are in sync with its strategy of investing in high-quality businesses.

Albemarle, currently sporting a Zacks Rank #1 (Strong Buy), has a projected earnings growth rate of 425.3% for the current year. The Zacks Consensus Estimate for ALB's current-year earnings has been revised 63.7% upward in the past 60 days. You can see the complete list of today’s Zacks #1 Rank stocks here.

Albemarle’s earnings beat the Zacks Consensus Estimate in each of the last four quarters. It has a trailing four-quarter earnings surprise of roughly 24.2%, on average. ALB has gained around 28% in a year.

Univar’s earnings beat the Zacks Consensus Estimate in three of the trailing four quarters, the average being 27.6%. UNVR has gained around 3% over a year.

Sociedad has a projected earnings growth rate of 530.7% for the current year. The Zacks Consensus Estimate for SQM’s current-year earnings has been revised 18.8% upward in the past 60 days.

Sociedad has a trailing four-quarter earnings surprise of roughly 27.2%. SQM has rallied roughly 85% in a year. The company currently carries a Zacks Rank #2.