Located on the western shore of Lake Como, the luxury lifestyle hotel will likely comprise 145 luxurious guest rooms, including two penthouse suites. It will come with amenities like a lobby bar, a floating pool and multiple restaurants and bars.

With reference to the opening, Josh Fluhr, senior vice president and managing director, EDITION Hotels, Marriott International, stated, "We are excited to work with Bain Capital Credit and Omnam Group to introduce the EDITION Hotels brand to one of Italy's most beautiful destinations. Today's signing demonstrates guests continued demand for luxury accommodations and experiences."

Marriott is consistently trying to expand its presence worldwide and capitalize on the demand for hotels in international markets. The company plans to expand its global portfolio of luxury and lifestyle brands. At the end of second-quarter 2022, Marriott's development pipeline totaled nearly 2,942 hotels, with approximately 495,000 rooms. Nearly 203,300 rooms were under construction. During the quarter, the company added 97 new properties (16,917 rooms) to its worldwide lodging portfolio.

In 2022, Marriott anticipates net room growth in the range of 3-3.5%. The hotel company is also trying to strengthen its presence outside the United States, especially in Asia, Latin America, the Middle East and Africa. The company’s European pipeline has grown consistently in the recent past and is expected to continue going forward. 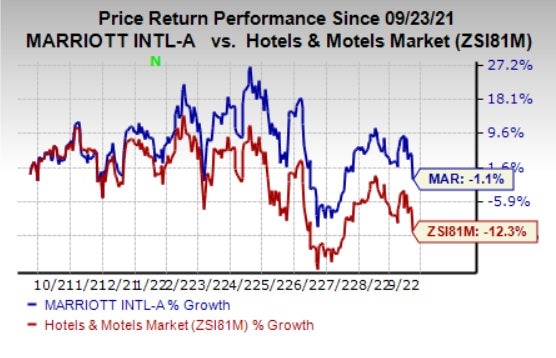 Coming to price performance, shares of Marriott have declined 1.1% in the past year compared with the industry’s 12.3% fall. The company benefited from robust leisure demand and business and cross-border travel improvements. During the second quarter of 2022, the company reported a strong RevPAR recovery in Europe. Also, group demand in the United States and Canada increased sharply during the quarter, leading to improved occupancies and strength in ADR. With global trends improving, the company expects the recovery momentum to continue in the future. Attributes such as pent-up demand for all types of travel, the shift of spending towards experiences versus goods, sustained high levels of employment, lifting of travel restrictions and opening borders (in most markets) are likely to aid the company in the upcoming periods. Meanwhile, earnings estimates for 2022 have increased in the past 30 days, depicting analysts’ optimism regarding the stock growth potential.

Marriott Vacations sports a Zacks Rank #1. VAC has a trailing four-quarter earnings surprise of 13.9%, on average. The stock has declined 15.1% in the past year.

The Zacks Consensus Estimate for VAC’s current financial year sales and earnings per share (EPS) indicates an increase of 19.7% and 131.4%, respectively, from the year-ago period’s reported levels.

Hyatt carries a Zacks Rank #2. H has a trailing four-quarter earnings surprise of 798.8%, on average. The stock has increased 10.7% in the past year.

The Zacks Consensus Estimate for H’s current financial year sales and EPS indicates growth of 89.1% and 113%, respectively, from the year-ago period’s reported levels.

Choice Hotels carries a Zacks Rank #2. CHH has a trailing four-quarter earnings surprise of 11.2%, on average. The stock has declined 13.7% in the past year.

The Zacks Consensus Estimate for CHH’s current financial year sales and EPS indicates growth of 25.3% and 21.7%, respectively, from the year-ago period’s reported levels.