Service Corporation (SCI) Hurt by Costs, Down 10% in 6 Months

Service Corporation International (SCI - Free Report) has been struggling with escalated cost concerns. Its Cemetery segment revenues came in soft in the second quarter of 2022. Also, a rise in the cremation rate is a concern for the company’s revenues per service.

Though the deathcare services provider has been benefiting from strong Funeral segment revenues and a focus on expansion, its bottom-line view for 2022 suggests a decline from the year-ago period.

In the second quarter of 2022, the core cremation rate for Service Corporation rose 170 basis points. The continuation of such trends is likely to weigh on the company’s revenues per service. 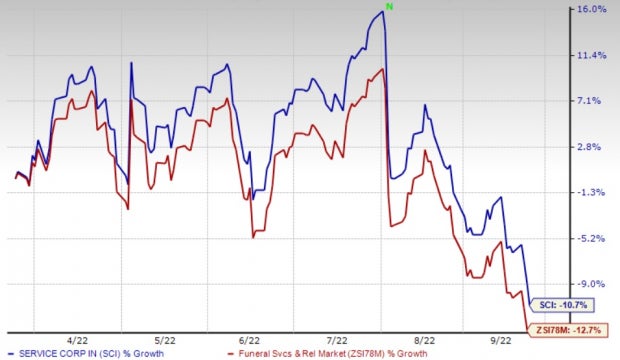 In the second quarter of 2022, consolidated Cemetery revenues came in at $442 million, down from $455.8 million reported in the year-ago quarter. Comparable cemetery revenues decreased 4%, mainly due to softcore and other revenues. Core revenues fell $11.7 million on reduced preneed cemetery sales production.

Comparable preneed cemetery sales production declined 3.1% due to a fall in the velocity of contracts sold. This was a result of overall inflation and a diversion in consumer attention. This was somewhat offset by the better-than-anticipated sales average per contract growth.

The comparable cemetery gross profit fell by $14.1 million to $147.4 million. The gross profit percentage contracted to 33.7% from 35.4% reported in the year-ago quarter. The company witnessed a spike in labor maintenance costs in its cemeteries, internally as well as with third-party vendors.

The overall company’s gross profit decreased to $266.6 million from $273.3 million reported in the year-ago quarter. Corporate general and administrative costs increased to $45.7 million from $33.6 million, mainly due to the timing of favorable adjustments to workers’ compensation, general liability and incentive compensation costs in the year-ago quarter.

Management incurred $3 million on increased expenses associated with a long-term incentive compensation plan. The operating income of $221.2 million decreased from $245.8 million reported in the year-ago quarter. These factors also weighed on the bottom line.

A Look at Q2 Earnings & Ahead

Shares of this Zacks Rank #4 (Sell) company have declined 10.7% in the past six months compared with the industry’s drop of 12.7%.

Consumer Staple Stocks Worth a Look

Chef’s Warehouse, a distributor of specialty food products in the United States, currently sports a Zacks Rank #1 (Strong Buy). CHEF has a trailing four-quarter earnings surprise of 355.9%, on average. You can see the complete list of today’s Zacks #1 Rank stocks here.

Lancaster Colony, which manufactures and markets food products for the retail and foodservice markets, currently sports a Zacks Rank of 1. LANC delivered an earnings surprise of 170% in the last reported quarter.

The Zacks Consensus Estimate for Lancaster Colony’s current financial-year sales and EPS suggests growth of 9.6% and 38.3%, respectively, from the corresponding year-ago reported figures.