Valued at $985.3 million, the contract is projected to be completed by March 2027. Per the terms of the deal, Raytheon will provide system design and develop the HACM weapon through model-based critical design review, qualification, integration, manufacturing and testing.

Work related to this deal will be executed in Tucson, AZ.

How Will the Deal Favor Raytheon?

Notably, HACM is a first-of-its-kind weapon developed in conjunction with the Southern Cross Integrated Flight Research Experiment (SCIFiRE), a U.S. and Australia project arrangement. HACM, with the help of Scramjet engines, is able to reach targets more quickly than traditional missiles, allowing it to potentially evade defensive systems. No doubt, such an advanced weapon will bolster Raytheon’s position in the U.S. defense space, thereby boosting the company’s top line in the coming quarters.

Per a report by the Allied Market Research firm, the global rocket and missile market is projected to expand at a CAGR of 4.2% during the 2022-2031 period to reach $82 million by 2031. Such massive growth projections indicate solid opportunities for Raytheon Technologies, Northrop Grumman (NOC - Free Report) , Lockheed Martin (LMT - Free Report) and Boeing (BA - Free Report) , which specialize in developing technologically advanced missiles.

Lockheed boasts a four-quarter average earnings surprise of 64.46%. The stock has a long-term earnings growth rate of 5.4%.

The Zacks Consensus Estimate for Boeing’s 2022 sales suggests an improvement of 14.8% from the 2021 reported figure. The stock has a long-term earnings growth rate of 4%.

Northrop boasts a four-quarter average earnings surprise of 3.92%. The stock has a long-term earnings growth rate of 2.2%.

In the past year, Raytheon Technologies’ shares have lost 4.3% compared with the industry’s 8.1% decline. 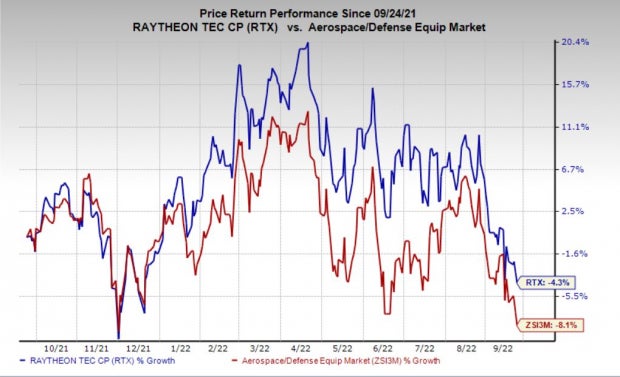 Should You Add NMI Holdings (NMIH) Stock to Your Kitty Now?