The study met its primary endpoint. Data from the study showed that 28 weeks of treatment with monthly ION449 (60 mg) led to a statistically significant reduction of 62.3% in low-density lipoprotein cholesterol (LDL-C) levels compared to placebo, the primary efficacy endpoint.

Also, treatment with ION449 was generally safe and well tolerated.

However, the reduction in LDL-C levels achieved in the study did not achieve the pre-specified efficacy criteria. Owing to this, AstraZeneca (AZN - Free Report) decided not to advance ION449 into a phase III study for treating hypercholesterolemia.

Ionis is developing ION449 in partnership with AstraZeneca. AZN remains focused to determine the next steps for the SOLANO study.

Shares of Ionis have rallied 47.8% so far this year compared with the industry’s decline of 26.7%. 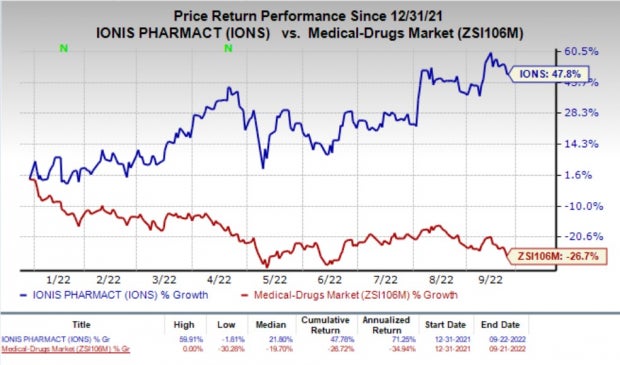 Ionis is also developing eplontersen for the treatment of transthyretin-mediated amyloidosis with AstraZeneca.

In June 2022, Ionis announced data from the phase III NEURO-TTRansform study on eplontersen in TTR polyneuropathy. The study met its primary endpoint of serum TTR concentration in mNIS+7 as well as the key secondary endpoint, Norfolk’s quality of life. The interim analysis of 35-week data revealed that eplontersen led to highly statistically significant and clinically meaningful changes from baseline in each of these endpoints compared to a historical placebo.

Based on these results, Ionis and AstraZeneca will file a new drug application seeking approval of eplontersen for TTR polyneuropathy later in 2022.

BIIB is responsible for commercializing Spinraza which is approved for treating spinal muscular atrophy worldwide. Ionis receives royalties from Biogen on Spinraza’s sales.

Ionis is developing, pelacarsen in collaboration with Novartis.

Ionis and Novartis are evaluating pelacarsen in the ongoing phase III cardiovascular outcome study, HORIZON, in patients with established cardiovascular disease and elevated lipoprotein(a), or Lp(a).