Barclays (BCS) Sued for Exceeding Bond Sale Limit by $17.6B

A lawsuit was filed against Barclays PLC (BCS - Free Report) in the U.S. District Court in Manhattan on Friday by two Florida pension plans — the City of North Miami Beach Police Officers’ and Firefighters’ Retirement Plan, and the City of North Miami Beach General Employees’ Retirement Plan. Shareholders claim that BCS defrauded them with its sale of $17.6 billion more debt than regulators had allowed.

Per the complaint, Barclays made “materially false and misleading” assurances in its annual reports that its internal controls over financial reporting were effective.

There are claims that BCS overstated profits, and understated operating and “litigation and conduct” expenses by not disclosing the over-issuance in its 2021 earnings releases.

Barclays has not made any comment yet. The bank’s chief executive officer, C.S. Venkatakrishnan, and his predecessor, Jes Staley, are among the defendants.

In March 2022, BCS said that it expected to incur an estimated £450-million loss for issuing structured products in excess of what it had registered for sale. The bank revealed that in August 2019, it registered with U.S. regulators for the sale of investment products worth up to $20.8 billion but ended up issuing products worth $36 billion. In July, it increased the oversold amount by $2.4 billion.

On Sep 15, 2022, BCS said that investors submitted claims covering $7 billion of the securities.

Over the past year, shares of BCS have lost 32.4% compared with the 15.1% decline of the industry. 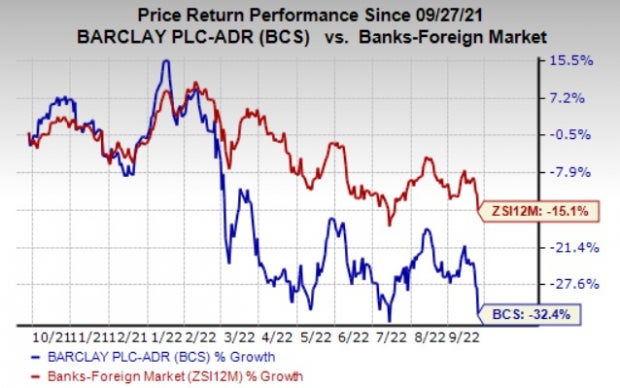 Malpractices by Other Firms

A unit of The Bank of New York Mellon Corporation (BK - Free Report) was charged with a record fine and a reprimand by the Central Bank of Ireland. The company broke the rules on outsourcing fund administration services and provided “inaccurate and incomplete information” to the regulators.

BNY Mellon Fund Services DAC admitted to the breaches, which took place between July 2013 and December 2019. It was fined €10.78 million ($11.8 million) for 16 regulatory breaches. The penalty was reduced from €15.4 million as the company decided to settle.

The Central Bank of Ireland’s director of enforcement, Seana Cunningham, said that BNY Mellon “failed to act with expediency, transparency and openness even once it was aware that there were further issues with its outsourcing arrangements.”

This March, Deutsche Bank AG (DB - Free Report) agreed to prolongate the term of an existing independent compliance monitor until February 2023, after the U.S. Department of Justice (“DOJ”) prosecutors detected that the bank breached the terms of a deferred prosecution agreement (DPA) by not timely revealing a misconduct complaint on environmental, social and governance-related information in its asset-management arm, DWS.

Deutsche Bank had signed a DPA with the DOJ in 2021. As part of the settlement related to the bank’s alleged manipulative commodities trading and bribery practices, DB had agreed to notify the DOJ about potential legal issues at its earliest knowledge of the same.