Production for advanced batteries for future EVs for Ford and Lincoln EVs, including the F-150 Lightning and a second all-new battery-electric pickup, is expected to begin in 2025.

The preparation of the land already began in March, with considerable progress so far. The development is also noteworthy for Tennessee since it brings the state to the forefront of the EV race.

The avant-garde auto production complex has been envisioned on a massive scale and is the largest-ever manufacturing unit in the company’s glorious run of 119 years. It aims at propelling the company’s EV journey. It has been less than a year since Ford and the South Korea-based battery maker, SK On, pledged a whopping $5.6 billion investment to build the intensively modernized and cutting-edge plant through a memorandum of understanding. The facility is a springboard for Ford’s future vehicles that the company believes will stir up a storm in the EV market.

BlueOval City will include a vehicle assembly plant, a battery plant jointly operated by Ford and SK, and supplier facilities and battery recycling operations. The facility is expected to employ 6,000 workers by 2025 once production commences.

Ford and SK have earmarked a capital spending of $11.4 billion to step up EV capabilities. Apart from the Tennessee plan, the companies will set up a massive campus in Kentucky as well to manufacture next-generation EVs. The two plants together aim to create 11,000 new jobs.

Ford’s zealous electrification efforts are testimony to its vision and progress. It has set an annual EV production target of 600,000 units by the end of next year and 2 million by late 2026. The Blue Oval City unit is sure to contribute to scaling up EV production to realize the targets.

Ford witnessed an increase of 27.3% year over year in its August U.S. sales. The automaker reported sales of 158,088 new vehicles for the month. This includes Ford sales of 151,695 vehicles, up 27.5% and Lincoln sales of 6,393 vehicles, up 24%. Moreover, it is to be noted that Ford EV sales totaled more than 36,500 units through August, comprising nearly 5,900 vehicles in the month, skyrocketing 307% year over year. The company has again emerged as America’s best-selling brand for the second consecutive month. The August sales clearly indicate that Ford’s efforts are bearing fruit.

Shares of Ford have lost 13.1% in the past year compared with its industry’s 12.3% decline. 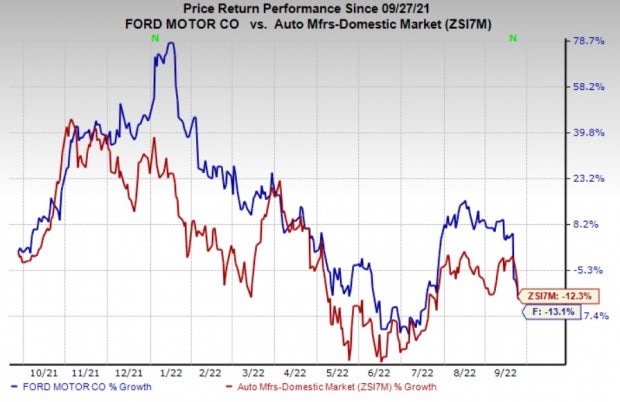 Yamaha’s earnings beat the Zacks Consensus Estimate in three of the trailing four quarters and missed in one. YAMHF pulled off a trailing four-quarter earnings surprise of 47.95%, on average. The stock has declined 32.7% over the past year.

PACCAR has an expected earnings growth rate of 45.3% for the current year. The Zacks Consensus Estimate for current-year earnings has remained constant in the past 30 days.

PACCAR’s earnings beat the Zacks Consensus Estimate in three of the trailing four quarters and missed in one. PCAR pulled off a trailing four-quarter earnings surprise of 7.44%, on average. The stock has risen 2.7% in the past year.

Visteon’s earnings beat the Zacks Consensus Estimate in three of the trailing four quarters and missed in one. VC pulled off a trailing four-quarter earnings surprise of 400.13%, on average. The stock has risen 12.8% in the past year.