Adjusted earnings per share (excluding 44 cents from non-recurring items) of $3.13 missed the Zacks Consensus Estimate by 3.7% but increased 8.7% year over year. The bottom line was driven by higher revenues. There has been no impact of the disappointing earnings performance on the stock so far since the result release on Sep 22.

FactSet’s revenues of $499.3 million in the quarter surpassed the Zacks Consensus Estimate by 1.5% and increased 21.2% year over year. The uptick was driven by addition of CUSIP Global Services (CGS) and Analytics & Trading and Research & Advisory solutions.

Shares of FDS have gained 6.4% over the past year against the 23.6% decline of the  industry  it belongs to. 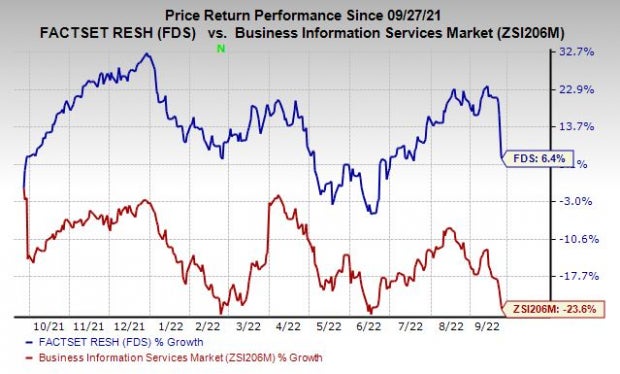 Organic ASV generated from the United States was $1.14 billion, up 9.3% from the prior-year quarter’s level. Organic ASV from EMEA and the Asia Pacific regions was $486 million and 191.7 million each, up 8.4% and 12% year over year, respectively.

FactSet added 219 clients in the reported fiscal quarter, driven by an increase in corporate and wealth clients, taking the total to 7,538. The annual client retention rate was 92%. At the end of the said fiscal quarter, the total employee count was 11,203, up 2.9% from the figure registered in the last 12 months, driven primarily by an increase in the content organization.

Performances of Other Business Services Companies