Valued at $32.8 million, the contract is expected to be completed by Jun 30, 2027. Work related to this deal will be executed in Stratford, CT.

The aircraft is the primary medium-lift helicopter for the U.S. Army, performing a wide range of missions that encompass Air Assault, MEDEVAC, CSAR, Command and Control, and VIP transport. The centerpiece of the UH-60M Black hawk helicopter is an advanced digital avionics suite that provides improved situational awareness and interoperability with the Future Combat System.

In recent times, U.S. military helicopters have gained prominence and significant traction due to advancements and integration of new tactical, logistical and other important features. Some of these developments can be attributed to Lockheed Martin, paving the way for securing valuable helicopter-related contracts in recent times. The latest contract win is a bright example of that.

The global attack helicopter market is estimated to witness a CAGR of more than 4% during the 2020-2025 period, per the latest forecast made by market research firm, Mordor Intelligence. This indicates solid opportunities for renowned combat helicopter manufacturers like Lockheed Martin, Textron (TXT - Free Report) , Airbus (EADSY - Free Report) and Boeing (BA - Free Report) .

TXT stock boasts a long-term earnings growth rate of 12.5%. The Zacks Consensus Estimate for 2022 sales implies growth of 6% from the 2021 reported figure.

Airbus is one of the world's largest suppliers of advanced military helicopters. Its product portfolio includes the H135 combat helicopter, H145M helicopter, AS565 MBe, H160M, H175M, H215M, H225M and a few more.

BA stock boasts a long-term earnings growth rate of 4%. The Zacks Consensus Estimate for 2022 sales implies growth of 14.8% from the 2021 reported figure.

In the past year, shares of Lockheed have gained 15.7% against the industry’s 37.7% decline. 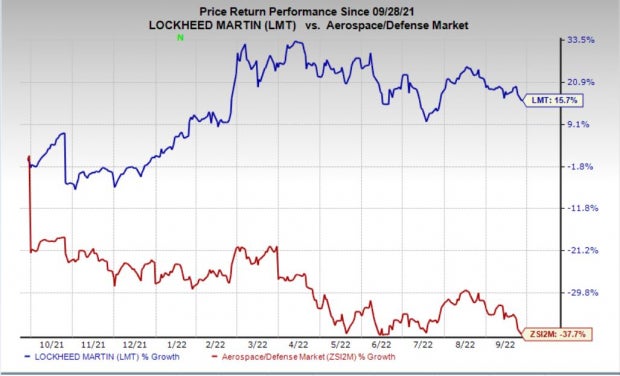 Will Thor's (THO) Q4 Earnings Snap Its Surprise Streak?