In a recent buildup to the 2014 rollover accident that killed the Hill couple from Georgia, Ford Motor (F - Free Report) has appealed to a court in the country for a new trial after a jury came out with a verdict against it.

In a blow to the automaker last month, jurors delivered their verdict following a 14-day trial in a state court in Georgia where it ordered the company to pay more than $1.7 billion for the accident. Ford's lawyers had defended the company and its engineers' actions against the charges that they had willfully turned a blind eye to the issue out of sheer indifference to passenger safety.

The case that has been dragging on for years was initially lodged against Ford by the family of Melvin and Voncile Hill, the persons killed. The couple was driving a 2002 Ford F-250 Super Duty truck from their farm in Georgia when the right front tire ruptured and the truck rolled over, killing both. The Hill family claimed that Ford had prior knowledge that the roofs of the F-250 pickups were too flimsy to protect riders in the event of a rollover but did not warn consumers of the same until 2016.

This week Ford filed two motions in a state court in Georgia. One motion requested a new trial, while the other questioned the correctional damages imposed on it in August. In the fresh court filings, Ford has contended that a state judge unfairly debarred it in 2018 from providing evidence that would have testified to the safety and the quality of the truck involved in the fatal incident.

Ford also alleged in the filings that it was unable to point out other factors that could have played a role in the fatalities, including the likelihood that occupants weren’t properly wearing their seat belts. F’s lawyers had also argued that the load-carrying capacity on the tire installed on the truck was incorrect, which led to the accident. Ford opined that when the tire ruptured, Mr. Hill had improperly steered his truck which positioned it at a dangerous angle.

The plaintiffs’ attorney has said that he would look into the points raised by Ford in the motions but he is of the view that the company does not have a proper defense to present.

Of late, Ford has gone through a spate of recalls over quality issues. In the latest one, it recalled 277,040 passenger cars and pickup trucks in the United States on the grounds that there were chances of the rearview camera lens getting cloudy and reducing visibility for the driver. The recall covered certain F-Series trucks, namely F-250, 350 and 450 trucks, and the Lincoln Continental, all belonging to the 2017 through 2020 model years.

A few weeks ago, it recalled another 58,000 F-150 trucks over the driveshaft issue. In another instance, nearly 49,000 Mustang Mach-E SUVs were called back due to a malfunction that could result in the engine not starting abruptly or losing propulsion power while in motion leading to dangerous situations, especially on busy roads.

In June, it issued the first recall of its Ford F-150 Lightning electric pickup trucks. This was due to a safety issue pertaining to the tire pressure monitoring system. It covered trucks with 20-inch or 22-inch all-season tires.

Year to date, Ford has issued 50 recalls, which is the most by any manufacturer, per data from the National Highway Traffic Safety Association. It is a top-notch player in America, but recalls continue to plague the auto giant, somewhat leaving a blotch in its performance.

Shares of Ford have lost 16.2% in the past year compared with its industry’s 10.7% decline. 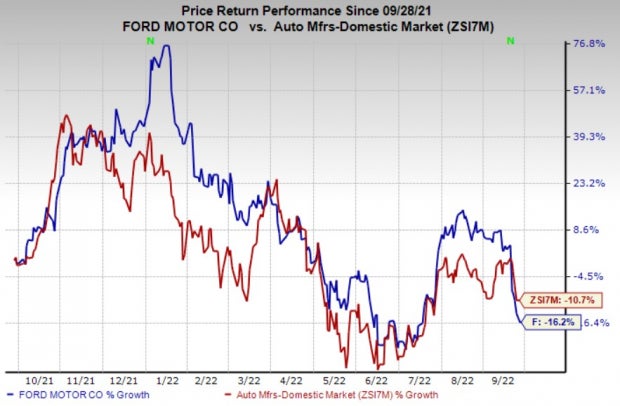