Live Nation Entertainment, Inc. (LYV - Free Report) is poised to benefit from pent-up demand for live events, Ticketmaster systems and the sponsorship and advertising business. However, supply chain disruptions and inflationary pressures are a concern.

Let us discuss the factors highlighting why investors should retain the stock for the time being.

Live Nation benefits from pent-up demand for live events and robust ticket sales. The company stated that the robust performance of Ticketmaster drove the company’s overall profitability. Live Nation Entertainment noted that demand for concerts remains high with the economy opening. During the second quarter of 2022, the company promoted more than 12,000 concerts for 33.5 million fans, each up over 20% compared to the second quarter of 2019.

The coronavirus crisis has acted as a boon for Ticketmaster systems. Demand for digital ticketing increased as venues and artists seek contactless transactions due to the pandemic. Ticketmaster added new clients, which resulted in 12.8 million net new fee-bearing tickets in the first half of 2022. Also, it stated solid fan demand leading to a growth in ticket buying and on-site spending. Backed by solid consumer demand for premium seats and VIP experiences, Ticketmaster price sales and GTV during the second quarter displayed growth of 2.5 times the volume from 2019 levels. In 2022, the company anticipates Ticketmaster to benefit from increased Live Nation concert ticket sales and additional sales from new clients.

Emphasis on sponsorship and advertising business bode well. During second-quarter 2022, sponsorship and advertising revenues were $263.8 million, up from the prior-year quarter’s $44.6 million. The upside was primarily backed by additional revenues from purchase path integration (with new partners including Google, AWS and Hulu), the restart of a full festival season and the addition of the Mexico market to its portfolio. Also, it emphasized on the strong festival lineup (for the third quarter) with activities involving on-site activation support. Given a solid demand and strong festival lineup, the company anticipates the momentum to continue in the upcoming periods.

The company is optimistic about its growth in 2022 and 2023. Robust fan engagement is likely to continue into 2022 and 2023, as arenas, amphitheaters and stadiums are likely to witness double-digit growth in their show count and ticket sales relative to 2019 levels. For concerts, the company stated that it had already sold more than 100 million tickets for shows in the second half of 2022 and 2023. For the remainder of 2022, confirmed show bookings are up more than 30%, owing to double-digit increases in every market and across all venue types. In third-quarter 2022, the company is likely to benefit from robust attendance. Live Nation Entertainment believes that several artists like Dave Matthews, Luke Bryan, Maroon 5, Travis Scott and Garth Brooks, among others, will have multi-year tours across the United States and Europe. This, in turn, will drive the company’s performance. 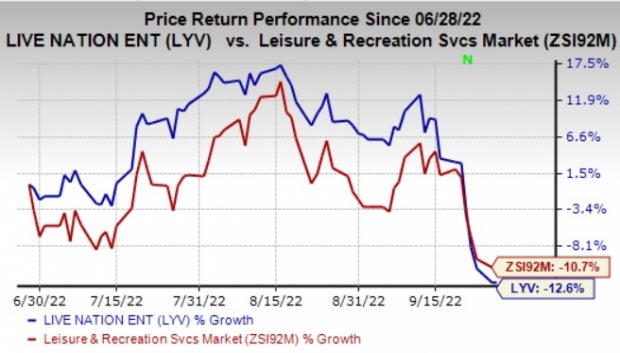 Shares of Live Nation have declined 12.6% in the past three months compared with the industry’s 10.7% fall. Inflationary pressures and supply chain delays had taken a toll on the company. Also, limited activity in the Asia Pacific region added to the downside. Although the company’s operations continue to recover from the negative impact of the coronavirus crisis, the implications of future disruptions cannot be ruled out. The company anticipates variable costs per fan, excluding talent, to increase 7% in 2022.

Marriott Vacations sports a Zacks Rank #1. VAC has a trailing four-quarter earnings surprise of 13.9%, on average. The stock has declined 26.5% in the past year.

The Zacks Consensus Estimate for VAC’s current financial year sales and earnings per share (EPS) indicates an increase of 19.7% and 131.4%, respectively, from the year-ago period’s reported levels.

Hyatt carries a Zacks Rank #2. H has a trailing four-quarter earnings surprise of 798.8%, on average. The stock has declined 2.7% in the past year.

The Zacks Consensus Estimate for H’s current financial year sales and EPS indicates growth of 89.1% and 113%, respectively, from the year-ago period’s reported levels.

Choice Hotels carries a Zacks Rank #2. CHH has a trailing four-quarter earnings surprise of 11.2%, on average. The stock has declined 19.1% in the past year.

The Zacks Consensus Estimate for CHH’s current financial year sales and EPS indicates growth of 25.3% and 21.7%, respectively, from the year-ago period’s reported levels.