9 Meters (NMTR) Up on Results From Bowel Syndrome Candidate

9 Meters Biopharma (NMTR - Free Report) was up 31.7% pre-market on Sep 27, after the company announced top-line results from its phase II study of its lead candidate, vurolenatide. The candidate is being developed for adults with short bowel syndrome (SBS). The company also reported a successful end-of-phase II meeting with the FDA to progress the candidate to a phase III study. This also impacted the surge in 9 Meters’ stock price. 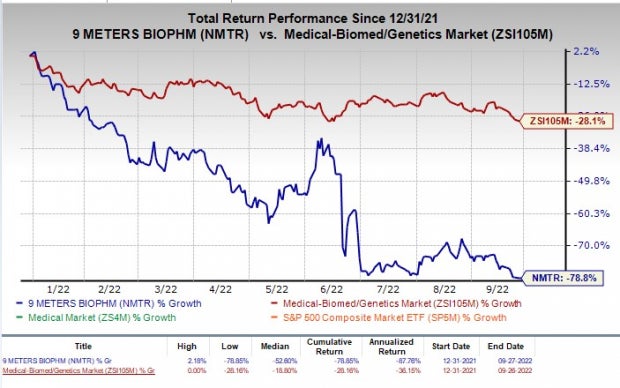 The study’s primary endpoint was the change in baseline total stool output (TSO) volume in 24 hours throughout six weeks.

The arm treating patients with 50 mg vurolenatide every two weeks witnessed a 30% decline in the 24-hour TSO volume against a 32% increase in the placebo arm. This arm exhibited an optimal pharmacokinetic profile of the candidate.

The 50 mg vurolenatide every week treatment arm witnessed an 8% fall in TSO for a relative reduction compared with a placebo of 40%. Both arms demonstrated evidence of drug accumulation, resulting in a suboptimal pharmacokinetic profile of the candidate.

No serious adverse events were reported related to vurolenatide.

Thus, the results from the phase II study affirmed the safety and efficacy of vurolenatide and contributed to 9 Meters’ decision to take the study forward to phase III.

Based on the positive results of the phase II study, the company also reported the outcome of its end-of-phase II meeting with the FDA regarding its candidate.

According to the outcome of the end-of-phase II meeting, the company intends to submit the phase III protocol to the FDA by the fourth quarter of 2022. After the protocol’s finalization, 9 Meters will provide the investors with further details on the phase III study of vurolenatide.

Investors must also note that the company is also developinglarazotide, a tight junction regulator for multi-system inflammatory syndrome in children. The company also has several early-stage pipeline candidates being developed for rare undisclosed diseases.