Centene Corporation (CNC - Free Report) recently announced that its Nebraska subsidiary Nebraska Total Care has received a statewide Medicaid managed care contract from the Nebraska Department of Health and Human Services (DHHS). Initially inked for five years, the contract can be renewed twice for one year each.

The latest contract win allows the Centene unit to work closely with its chain of local providers and community partners in Nebraska and extend cutting-edge solutions at affordable costs. The solutions are meant to improve health outcomes for the state’s Medicaid members, who are part of Heritage Health, the Medicaid Managed Care Program of Nebraska. The program makes physical health, behavioral health, pharmacy, hospital, dental and other services accessible to the state’s Medicaid community.

The Nebraska subsidiary of Centene has successfully established its solid statewide footing since it began serving Nebraskans in 2017, thanks to its well-performing Medicaid business. The strength of its Medicaid expertise is reflected via similar contract wins, including the latest one. As a testament to its fortified base across Nebraska, the CNC unit caters to more than 125,000 Medicaid enrollees and collaborates with around 60,000 healthcare providers of the state.

The current year has been quite an active year so far for CNC with respect to contract wins. In the ongoing month of September, along with the Nebraska contract win, CNC’s Texas arm Superior HealthPlan struck a deal to continue catering to the state’s foster children and youth via its Medicaid program. Some other states having chosen the managed care organization this year are Louisiana, Indiana and Missouri.

Partnerships with healthcare providers of a particular region offer Centene an insight into the diversified needs of the local members and their families. In addition, CNC’s continuous efforts to boost provider collaborations and extend value-based care through its Medicaid business, led the business to conquer a significant share of the Medicaid market in the United States. As CNC continues to leverage the Medicaid business to penetrate more states, its customer base is expected to grow simultaneously.

Membership growth usually sounds good for a health insurer like CNC since premiums derived from its health insurance plans contribute a chunk to the top line. As of Jun 30, 2022, Centene’s Medicaid membership improved 10.1% year over year.

Shares of Centene have gained 22.4% in a year compared with the industry’s rally of 26.5%. CNC currently carries a Zacks Rank #2 (Buy). You can see the complete list of today’s Zacks #1 Rank (Strong Buy) stocks here. 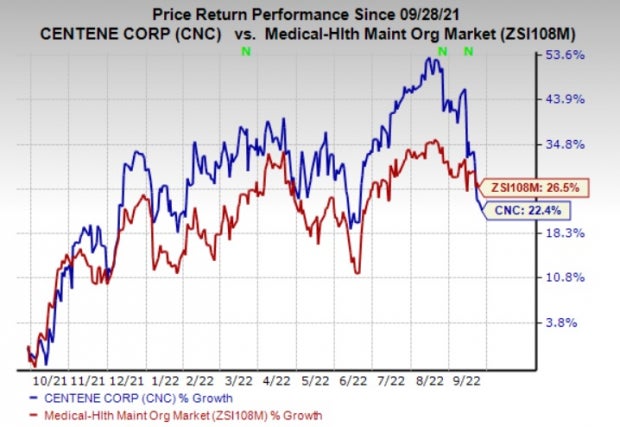 Another Stock to Consider

The bottom line of AMN Healthcare outpaced estimates in each of the trailing four quarters, the average being 15.66%. The Zacks Consensus Estimate for AMN’s 2022 earnings indicates a rise of 40.2%, while the same for revenues suggests an improvement of 28.5% from the respective year-earlier actuals. The consensus mark for AMN Healthcare’s 2022 earnings has moved 8.2% north in the past 60 days. Shares of AMN Healthcare have lost 8.6% in a year.