Ford Motor (F - Free Report) is putting in zealous efforts to rev up its electrification progress. In a landmark announcement via the media recently, it has set up a new subsidiary, Ford Electric Mach Technologies or FMeT, dedicated solely to the research and developmen, and operation of intelligent electric vehicles (EVs) in China. The company has already made a notable footprint in the U.S. EV space, and the latest development will boost its China's electrification strategy.

FMeT will be a first-of-kind EV-dedicated entity set up by a foreign automaker in China. The company currently sells three EV models in the country, including its signature Mustang Mach-E crossover, which recorded deliveries of 3,576 in the first half of this year.

Per the media report, the integrated R&D system will include an electrification center, a digital experience center and an advanced driver assistance system (ADAS) center. The digital experience center will focus on advanced cockpit and mobile connectivity solutions for Chinese customers. The ADAS center will leverage the BlueOval intelligent technology stack resource and partner with local companies for local road and traffic data. This will ensure a speedy deployment of Ford’s BlueCruise ADAS feature in the country.

Through its high-end intelligent EV-focused brand, Ford Select, the automaker has developed an independent direct sales network for premium EVs in China. Ford Select currently has 106 sales outlets in 43 cities in the country. Ford Select’s first flagship store will be opened by the end of the year. FMeT will adopt a direct sales model through this network instead of selling through dealerships. This will allow better brand penetration.

The announcement comes at a time when Ford’s business in China is experiencing weakness. F witnessed a dismal second-quarter sales performance in the country. The company sold a mere 120,000 vehicles in China in the second quarter of 2022, down 22% year over year. This marked the lowest sales in the country since the first quarter of 2020, when the company sold close to 89,000 vehicles. Ford reported its worst quarterly performance in the country since the onset of pandemic-related challenges. A re-imposition of lockdowns, especially in Shanghai and supply bottlenecks across some major facilities greatly impeded volumes.

In light of the dampening situation, Ford is focusing on new vehicle launches and joint ventures in the country to ensure a quick revival from the pandemic-led slump. Ford launched four new vehicles in the Chinese market in the second quarter, including the all-new Ford Equator Sport Dark Edition, new Focus, all-new F-150 Raptor and Lincoln Aviator.

Also, sales for Ford’s Mustang Mach-E, which was unveiled last year in the country, are picking up pace. Together with the all-new Ford Mondeo and all-new Lincoln Zephyr launched in the first quarter, the new product lineup is expected to drive up the momentum.

Setting up an independent EV business in the country will put a strong focus on the regional performance and hopefully ramp it up to pre-pandemic levels.

Shares of Ford have lost 17.4% in the past year compared with its industry’s 9.6% decline. 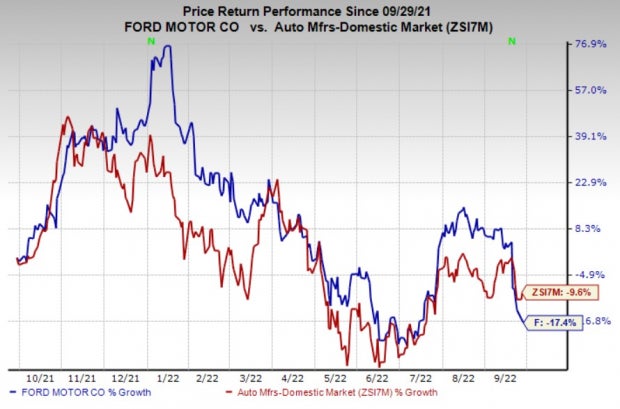 Wabash National’s earnings beat the Zacks Consensus Estimate in two of the trailing four quarters and missed in two. WNC pulled off a trailing four-quarter earnings surprise of 28%, on average. The stock has declined 0.2% in the past year.