Valued at $15.3 million, the contract is expected to be completed by February 2023. Per the terms of the deal, Raytheon will provide depot-level repair capability for the government of Kuwait’s inventory of AN/APG-79 AESA radar weapon replaceable assemblies.

The majority of work related to this deal will be executed in El Segundo, CA.

AN/APG-79 radars deliver increased air-to-air and air-to-surface targeting and tracking capabilities through the near speed of light beam steering. The APG-79 may be tailored to fit any platform's size, space and requirement, particularly for legacy aircraft.

This radar’s solid demand can be gauged from the fact that it is currently in full-rate production for the U.S. Navy and Royal Australian Air Force, with Raytheon delivering more than 700 systems to F/A-18 Super Hornet and Growler squadrons.

With the rapid escalation of geopolitical tensions globally in recent times, developed and developing nations have been boosting their defense arsenal significantly. Radars constitute a vital part of their defense equipment. While radars have been in use since World War II for locating threats and targets, nowadays, they are being used for multiple purposes like ground surveillance, missile control, fire control, air traffic control, moving target indication, weapons location and vehicle search.

Demand for military radar systems has expanded manifold in recent times, driven by factors like a rise in defense spending of emerging economies, an increase in regional tensions and inter-country conflicts that have boosted threats from missiles and aircraft. These, in turn, have been benefiting radar manufacturing companies like Raytheon in the form of contract wins like the latest one.

Notably, Northrop is a pioneer in Active Electronically Scanned Array (AESA) radars and has been at the forefront of AESA innovations for more than 60 years. The company’s broad portfolio of products comprises radars like AN/APG-83 scalable, agile beam radar, AN/ASQ-236 Dragon’s eye radar pod as well as AN/APG-81 and AN/APG-71 for F-35 and F-22 jets, respectively.

Northrop boasts a long-term earnings growth rate of 2.2%. The Zacks Consensus Estimate for 2022 sales indicates an improvement of 1.9% from the 2021 reported figure.

Lockheed boasts a long-term earnings growth rate of 5.4%. The stock has gained 13.5% in the past year.

In the past year, Raytheon Technologies’ shares have lost 6.8% compared with the industry’s 11.3% decline. 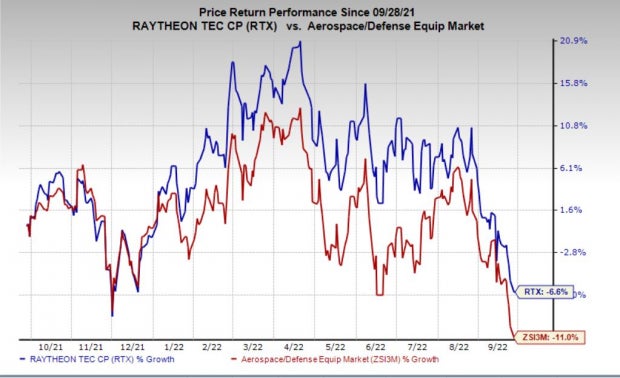