In a recent statement, Nikola Corporation (NKLA - Free Report) announced that it has extended its previous exchange offer to purchase all outstanding shares of common stock of Romeo Power until midnight Eastern Time at the end of Oct 12, 2022.

On Aug 1, Nikola struck a deal to acquire the EV battery developer Romeo. Nikola will take over Romeo’s battery manufacturing unit in Southern California and begin producing its EV packs in-house, thus gaining control over an important part of the supply chain.

Following the acquisition announcement, on Aug 29, through a wholly-owned subsidiary, Nikola began the exchange offer. It was previously scheduled to expire at midnight Eastern time at the end of Sep 26, 2022.

As of midnight Eastern Time, on Sep 26, 2022, the last business day prior to the announcement of the extension of the offer, nearly 70 million shares of Romeo common stock had been validly tendered and received, and not validly withdrawn, pursuant to the offer, representing approximately 37.65% of outstanding shares of Romeo common stock. A minimum of 50.1% of outstanding Romeo common stock or nearly 22.96 million additional shares must be validly tendered for the offer to be completed. Romeo stockholders who have previously tendered their shares are not required to re-tender or take any other action due to the extension of the offer.

As of now, the deadline to tender shares remains at midnight Eastern Time at the end of Oct 12, 2022, unless extended further. If less than a majority of the outstanding shares of Romeo common stock are tendered, the offer cannot be completed by Nikola.

The offer may be extended further in compliance with the merger agreement and the applicable rules and regulations of the U.S. Securities and Exchange Commission. All other terms and conditions will remain unchanged during the extended period.

The acquisition agreement stated that Nikola will provide Romeo with interim funding of $35 million to continue its operations until the transaction closes. The fund will comprise $15 million in senior secured notes and up to $20 million for a pack delivery incentive. Additional liquidity support is accessible if the transaction closing is delayed. Nikola anticipates that the acquisition will save up to $350 million over the next four years. Moreover, a reduction of 30-40% in non-cell-related battery pack costs by the end of 2023 is expected. The deal is also likely to enable Nikola to deliver increased range and charge rates in its commercial vehicles going forward.

Although it is a comparatively young EV company, Nikola has been successful in the end-to-end development and delivery of commercial EVs. Thus the deal will go a long way in solidifying its commitment to ensuring a zero-emission future.

In other news, Nikola is recalling all the 93 battery-electric Nikola Tre Class 8 trucks it has manufactured to date. It has decided on the recall because there is an improper installation of the seat belt shoulder anchors that could compromise protection in the event of a collision.

The assembly stands a chance of becoming detached under the weight of a passenger. The faulty seat belt anchor assembly design may stop a fastening screw from engaging correctly with a nut, thereby increasing the likelihood of weaker protection.

During a pre-delivery inspection at a dealership on Jul 18, a company employee noticed the issue and contacted Iveco, which admitted to the defect.

On Sep 14, it reported to the National Highway Traffic Safety Administration that it has no warranty or customer claims for the issue.

Nikola will replace the faulty components on all vehicles free of charge. Customers and dealers will be notified about the glitch through mailed letters between Oct 1 and Nov 1.

Separately, the federal fraud trial for Nikola’s founder, Trevor Milton, has resumed this week in a U.S. court. The dampening market condition places Nikola in a tough spot, with its stock price plummeting 24.02% last week to close at $3.89 a share, just above its 52-week low of $3.82.

Shares of NKLA have lost 63.4% over the past year compared with its industry’s 9.5% decline. 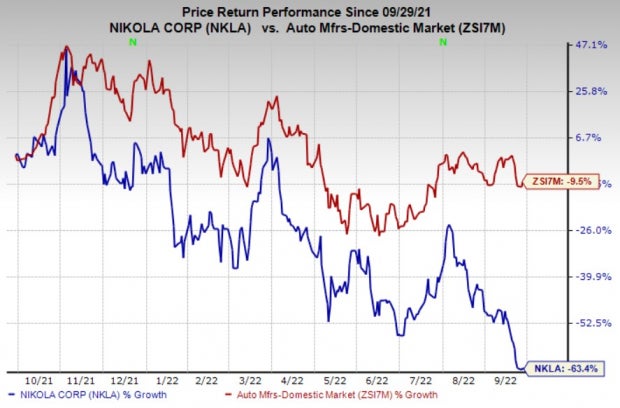