Bellerophon Therapeutics (BLPH - Free Report) was up 18.04% on Sep 27 after the company announced the FDA’s acceptance of its proposal to reduce the size of its ongoing phase III REBUILD study. The study is evaluating its lead candidate INOpulse for treating fibrotic interstitial lung disease (“fILD”).

However, shares of Bellerophon have plunged 63.2% in the year-to-date period compared with the industry’s decline of 27.3%. 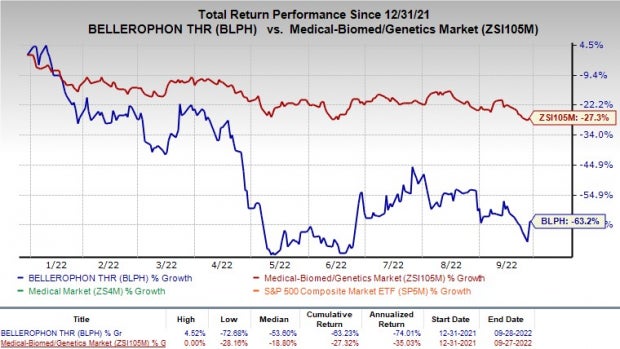 REBUILD is a phase III double-blind, placebo-controlled study being conducted to evaluate the safety and efficacy of INOpulse, a pulsed inhaled nitric oxide therapy, at a dose of 45 mcg/kg ideal body weight, in fILD patients versus placebo. The study’s primary endpoint was decided per an FDA consultation and was fixed on observing the change in Moderate to Vigorous Physical Activity (MVPA) in patients.

The REBUILD study was based on the positive data from Bellerophon’s phase II study demonstrating the safety and efficacy of INOpulse in improving the MVPA, multiple quality of life measures and key hemodynamic parameters.

The company previously intended to enroll 300 patients in the study for a 16-week blinded treatment period. However, the company has now decided to reduce the study size. The study’s independent Data Monitoring Committee (DMC) also supported the company’s decision to reduce its study size from 300 to 140 subjects. The decision was made following the evaluation of baseline MVPA characteristics and the safety data of the randomized subjects in the ongoing study.

The study’s primary objective, which is to maintain a power of more than 90% of MVPA based on the effect size observed in the phase II study of the candidate, remains unchanged.
With the reduction in the study size, Bellerophon expects to complete the enrollment in the phase III study by the first quarter of 2023. It also anticipates that the study’s top-line data will be made available by the third quarter of 2023.

In March 2020, the FDA also granted INOpulse an emergency expanded access (EA) to be a supportive treatment option for COVID-19 patients.