Molina Healthcare, Inc. (MOH - Free Report) recently announced that its Nebraska subsidiary, Molina Healthcare of Nebraska, is awarded a contract from the Nebraska Department of Health and Human Services (DHHS). Inked for five years, the new agreement will likely be effective Jan 1, 2024.

The contract will give Molina Healthcare an opportunity to extend health care coverage and serve the diversified needs of Nebraska residents, who are part of the state’s Medicaid managed care program (Heritage Health).

Backed by the latest contract win, Molina Healthcare will get to reach a state, which encompasses around 360,000 Medicaid members. The recent agreement is likely to bolster MOH’s customer base and strengthen its presence across Nebraska. A growing customer base continues to add strength to the Medicaid business of MOH, through which the health insurer devises cost-effective health plans and forays into several U.S. communities. As of Jun 30, 2022, MOH’s Medicaid membership increased 17.4% year over year.

In August, by dint of its Medicaid business, MOH won a four-year contract from the Iowa Department of Health and Human Services, which can be extended to four additional years. This was another great opportunity for Molina Healthcare to penetrate a geography, which caters to approximately 850,000 Medicaid members.

Molina Healthcare does not depend on only contract wins to expand its presence in the Medicaid market. Instead, it follows an inorganic growth route and resorts to acquisitions to back its Medicaid business in capturing a substantial portion of the U.S. In July 2022, MOH inked a deal to purchase assets of the Medicaid managed care organization, My Choice Wisconsin, for around $150 million. The transaction is likely to be completed this year itself. Molina Healthcare is able to pursue these growth initiatives through buyouts, riding on its adequate cash reserves.

Shares of Molina Healthcare have gained 3.1% year to date compared with the industry’s rally of 0.7%. MOH currently carries a Zacks Rank #2 (Buy). 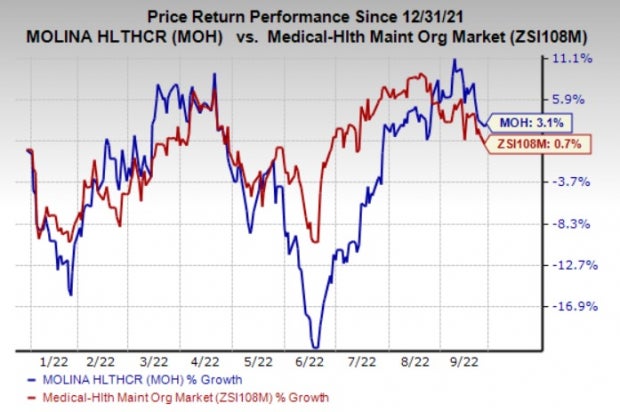 Other Stock to Consider

The bottom line of Lantheus outpaced estimates in each of the trailing four quarters, the average being 54.60%. The Zacks Consensus Estimate for LNTH’s 2022 earnings is pegged at $3.57 per share, which indicates to increase more than seven-fold from the prior year reading. The consensus mark for Lantheus’ 2022 earnings has moved 15.9% north in the past 60 days. Shares of Lantheus have surged 140.7% year to date.