The modification contract was awarded by the Naval Sea Systems Command, Washington, D.C. The deal involves the delivery of spare parts to support SEWIP Program Block 3 full-rate production. The work will be carried out at multiple locations, with the majority of it to be accomplished in Baltimore, MD.

The rising threat of missile attacks has been fueling the demand for an effective electronic attack system that excels in defeating inbound threats.

Countries globally have been reinforcing their military resources due to intense geopolitical tensions and amplified terrorist threats. To this end, an effective electronic warfare system that ensures anti-missile solution features is likely to witness a pent-up demand.

Lockheed Martin’s long-term earnings growth rate is pegged at 5.5%. Shares of LMT have returned 15.9% value to investors in the past year.

L3Harris’ Viper Shield all-digital electronic warfare suite is custom designed to be a baseline on advanced F-16 Block 70/72 aircraft and maximize their survivability and mission success. Some of its other product range include AN/ALQ-161A, AN / ALQ-211 CV-22, NH 90, AND F-16 self-protection system, AN / ALQ-214 (IDECM) F/A-18 countermeasure system, etc.

The long-term growth rate of L3Harris is pegged at 3.3%. The Zacks Consensus Estimate for LHX 2022 earnings suggests growth of 3.9% from the prior-year reported figure.

Since many years, General Dynamics has been performing as the Lead Systems Integrator for SEWIP Block 1. Its SEWIP, a spiral-block development program, provides an immediate improvement for the legacy surface ship electronic warfare detection and countermeasure system, the AN/SLQ-32.

General Dynamics boasts a long-term earnings growth rate of 10.2%. GD stock has appreciated 12.5% in the past year.

In the past year, shares of Northrop Grumman have rallied 34.3% against the industry’s decline of 19.8%. 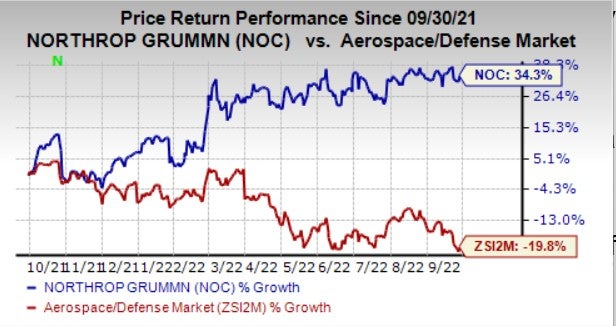