It has been a busy week for the biotech companies, with drug approvals and other regulatory news grabbing the spotlight.

The candidate met the primary endpoint of Clinical Dementia Rating-Sum of Boxes (the numeric scale used to quantify the various severity of symptoms of dementia). In addition, all key secondary endpoints were achieved with highly statistically significant results.  Based on these impressive data, Biogen’s partner Eisai plans to file for traditional approval of lecanemab in the United States and submit regulatory applications in the EU and Japan by the end of the first quarter of 2023.

The FDA has already accepted Eisai’s biologics license application (BLA) for lecanemab under the accelerated approval pathway and granted Priority Review. The agency has set a target action date of Jan 6, 2023, and agreed that the results of Clarity AD can serve as the confirmatory study to verify the clinical benefit of lecanemab.

Regeneron/Sanofi’s Dupixent Label Expansion: Regeneron Pharmaceuticals, Inc. (REGN - Free Report) and partner Sanofi (SNY - Free Report) announced that the FDA has approved a label expansion of the asthma drug Dupixent (dupilumab). The drug is now approved for of adult patients with prurigo nodularis. The FDA approval was based on data from two phase III studies, PRIME and PRIME2, evaluating the efficacy and safety of Dupixent in adults with prurigo nodularis. Data showed that Dupixent significantly reduced itch and skin lesions compared to placebo in direct-to-phase III program consisting of two pivotal trials. Sanofi records global net product sales of Dupixent, while Regeneron records its share of profits/losses in connection with global sales of Dupixent.

Dupixent is under review for prurigo nodularis in the European Union, and submissions to regulatory authorities in additional countries are also planned for 2022. Dupixent is already approved for use in certain patients with atopic dermatitis, asthma, chronic rhinosinusitis with nasal polyposis (CRSwNP), and eosinophilic esophagitis (EoE).

Ionis Updates on hypercholesterolemia Treatment:   Ionis Pharmaceuticals, Inc. (IONS - Free Report) announced that ION449 (AZD8233), which is being evaluated for the treatment of patients with hypercholesterolemia, will not advance into phase III development based on pre-specified criteria. Shares were down on the same. The company released top-line data from the phase IIb SOLANO study, which showed that 60mg of ION449 administered monthly achieved a statistically significant 62.3% reduction in low-density lipoprotein cholesterol (LDL-C) levels after 28 weeks compared to placebo, meeting the study's primary efficacy endpoint. The candidate was also generally safe and well tolerated in this study. However, these results did not achieve pre-specified efficacy criteria. Consequently, partner AstraZeneca has decided not to advance ION449 into phase III development for hypercholesterolemia. AstraZeneca will study the results from the SOLANO study to determine its next steps for the program.

Regulatory Update From Vertex: Vertex Pharmaceuticals Incorporated (VRTX - Free Report) announced that it has concluded discussions with the FDA for the rolling review of ex-vivo gene-therapy exagamglogene autotemcel (exa-cel). Per the discussions, Vertex has obtained permission from the FDA to initiate a rolling BLA submission for exa-cel. The gene therapy has been developed in collaboration with CRISPR Therapeutics. The BLA will seek FDA’s approval for exa-cel to treat sickle cell disease (SCD) and transfusion-dependent beta thalassemia (TDT). Vertex expects to start the rolling review in November and complete the submission by the first quarter of next year.

Vertex has already completed discussions on exa-cel for both SCD and TDT indications with European regulatory authorities. Based on these discussions, management intends to submit the regulatory filings in the European Union and the United Kingdom by this year’s end.

The Nasdaq Biotechnology Index has gained 2.13% in the past five trading sessions. Among the biotech giants, Biogen has gained 38.76% during the period. Over the past six months, shares of Biogen have soared 30.67%. (See the last biotech stock roundup here: Biotech Stock Roundup: GILD, BMYs Regulatory News, BLUEs Therapy Approval & More) 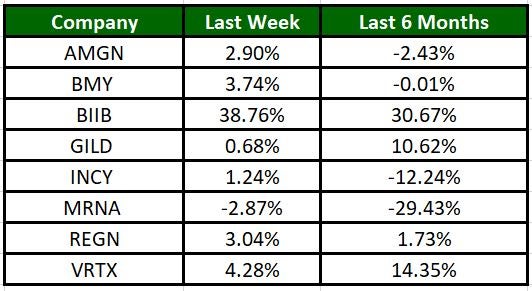 Stay tuned for other updates.

Reasons to Add Eversource Energy (ES) to Your Portfolio Now