Valued at $168.8 million, the contract is scheduled to be completed by September 2024. Per the terms of the deal, Boeing will repair two flight control surfaces used on the F/A-18E/F and E/A-18G aircraft.

The majority of the work in relation to this contract will be carried out in Jacksonville, FL.

Boeing, one of the major players in the defense business, stands out among its peers by virtue of its broadly diversified programs, strong order bookings and solid backlog. Furthermore, the company's expertise lies in a wide variety of aircraft components, repairs and modification-related programs.

Notably, its Defense, Space & Security segment’s portfolio has fixed-wing military aircraft, including F/A-18E/F Super Hornet, F-15 programs, P-8 programs, KC-46A Tanker and T-7A Red Hawk.  Boeing's combat-proven aerospace programs and associated services, along with the rapidly growing need for military aircraft due to heightened geopolitical uncertainties worldwide, result in a solid inflow of orders from the Pentagon. The latest contract win is an example of that. Such order flows, in turn, should boost the top line of the defense business segment.

With rising security threats across the globe, emerging economies like the Asia Pacific, the Middle East and South America are spending a lot on enhancing their defense arsenals. Meanwhile, developed nations like the United States and Europe have already been leading the defense market. With the United States being the largest worldwide weapons exporter, the nation has been spending amply on defense products. Boeing, the largest aircraft manufacturer in the United States, thus enjoys a dominant position in the combat aircraft market.

Per a Mordor Intelligence report, the global combat aircraft market is expected to witness a CAGR of 2.5% during the 2021-2026 time period, with North America constituting the largest share of this market. Such growth can be attributed to a rise in global threats and geopolitical instabilities and increased spending on defense. These projections should benefit Boeing along with other U.S.-based combat jet manufacturers like Northrop Grumman (NOC - Free Report) , Lockheed Martin (LMT - Free Report) and Textron (TXT - Free Report) .

Since its inception, Northrop Grumman has been a pioneer in the development of manned aircraft for combat. Northrop Grumman also has a tradition of providing technological leadership in all aspects of military aviation and aircraft, such as manned, unmanned, targeting, surveillance, and aircraft self-protection systems that enable warfighters to accomplish missions anytime and anywhere, under any conditions.

NOC boasts a long-term earnings growth rate of 2.2%. The Zacks Consensus Estimate for NOC’s 2022 sales implies an improvement of 1.9% over 2021’s reported figure.

Lockheed boasts a long-term earnings growth rate of 5.4%. The company has a solid four-quarter earnings surprise of 64.46%, on average.

TXT boasts a long-term earnings growth rate of 5.5%. The Zacks Consensus Estimate for TXT’s 2022 sales implies an improvement of 6% from the 2021 reported figure.

Shares of Boeing have lost 39.3% in the past 12 months compared with the industry’s decline of 21.1% 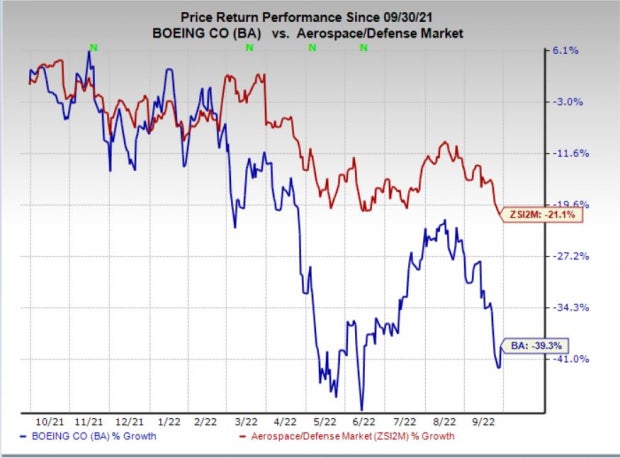