Factors That Make Centene (CNC) an Attractive Bet for Investors

Centene Corporation (CNC - Free Report) remains well-poised for growth, thanks to its solid Medicare and Medicaid businesses resulting in a growing customer base. Acquisitions, strong financial guidance for 2022 and a credible financial position act as other tailwinds to the stock. 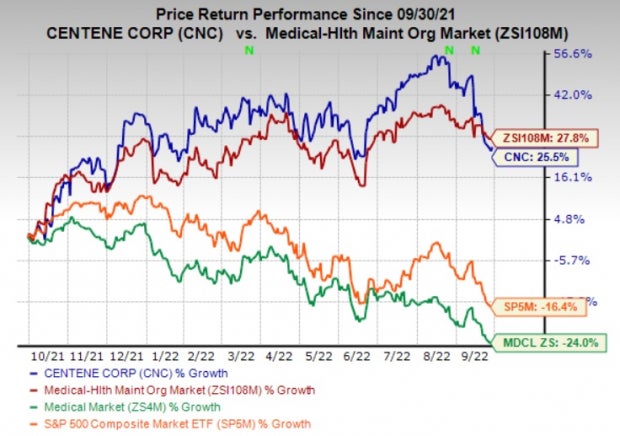 The Zacks Consensus Estimate for CNC's 2022 earnings is pegged at $5.70 per share, suggesting growth of 10.7%, while the same for revenues stands at $143.6 billion, implying a rise of 14% from the respective year-ago reported figures.

Additionally, the consensus mark for 2023 earnings stands at $6.30 per share, indicating an improvement of 10.5% from the prior-year reported figure.

Centene contains a decent earnings surprise record. CNC’s bottom line outpaced estimates in three of the trailing four quarters and missed the mark once, the average surprise being 2.99%.

Price-to-earnings (P/E) is one of the multiples used to value healthcare stocks. Compared with the health maintenance organization industry’s forward 12-month P/E ratio of 19.4, Centene has a reading of 12.7. It is quite evident that the stock is currently undervalued.

This year, Centene anticipates revenues between $141.6 billion and $143.6 billion, the midpoint of which indicates a 13.2% rise from the 2021 reported figure.

Revenues of Centene continue to be on an uptrend, courtesy of strength in its Medicare and Medicaid businesses that fetched several contract wins and led to membership growth for the health insurer.

The current year has been quite an active year so far for CNC with respect to contract wins. Notably, US states like Louisiana, Indiana and Missouri, among others, awarded Centene Medicaid contracts. In the ongoing month, along with the Nebraska contract win, CNC’s Texas arm Superior HealthPlan struck a deal to continue catering to the state’s foster children and youth via its Medicaid program.

Centene follows an inorganic growth route, which in turn, bolsters its capabilities and provides an opportunity to boost top-line growth. The managed care organization also resorts to divestitures to intensify focus on its core Managed Care business and conduct share repurchases or bring down the mounting debt level with proceeds from the sell-offs.

While the PANTHERx sale (Centene’s pharmacy business) was completed this July, divestment of the comprehensive pharmacy solutions organization Magellan Rx is expected to be completed in the fourth quarter of 2022.

As Centene attempts to reduce its debt burden through divestiture proceeds, it can utilize its existing cash reserves and a robust cash-generating ability to pursue growth-related initiatives. A declining debt burden is usually accompanied by reduced interest expenses, which is the case for Centene. Its interest expenses dipped 3.3% year over year in the first half of 2022.

The bottom line of AMN Healthcare outpaced estimates in each of the trailing four quarters, the average being 15.66%. The Zacks Consensus Estimate for AMN’s 2022 earnings indicates a rise of 40.2%, while the same for revenues suggests an improvement of 28.5% from the respective year-ago actuals. The consensus mark for AMN’s 2022 earnings has moved 0.9% north in the past 30 days.

Shares of ShockWave Medical and Lantheus have gained 32.7% and 166.1%, respectively, in a year. However, the AMN Healthcare stock has lost 8.4% in the same time frame.