Valued at $43 million, the contract is expected to be completed by August 2025. Per the contract, the company will provide lead yard support, and development studies and design efforts related to Virginia-class submarines. The deal was awarded by the Naval Sea Systems Command, Washington, DC.

In this context, it is imperative to mention that the increased focus on military submarines is likely to benefit General Dynamics, as its Electric Boat business unit is a prime contractor of submarines, and has established standards of excellence in the design, construction and lifecycle support of submarines for the U.S. Navy.

In this regard, the business is responsible for all aspects of design and engineering, and leads the construction of Virginia-class attack submarines. The company has 19 Virginia-class submarines in its backlog scheduled for delivery through 2031. This results in a steady flow of contracts from the Pentagon involving submarines. The latest contract win is a bright example of that.

Such a trend in demand is likely to bolster GD’s revenue-generation prospects from its Electric Boat business unit and may boost its overall top line.

Per the report from Mordor Intelligence, the submarine market???is projected to witness a CAGR of 4% between 2022 and 2031. Such abounding growth trends indicate ample growth opportunities for General Dynamics, as it enjoys a lucrative position in the military submarines space.

BAE Systems’ Astute class submarines are the U.K.’s largest and most powerful attack submarines and can strike targets up to 621 Miles from the coast with pinpoint accuracy.

The long-term earnings growth rate of BAESY is pegged at 9.3%. Shares of BAE Systems have rallied 17.8% in the past year.

Northrop Grumman has a long-term earnings growth rate of 2.2%. NOC’s investors have gained 30.4% in the past year.

Huntington Ingalls has a teaming agreement with Electric Boat to build Virginia class fast attack nuclear submarines. Its division Newport News is participating in the design and construction of the Columbia class (SSBN 826) submarine as a replacement for the current aging Ohio class nuclear ballistic missile submarines.

The Zacks Consensus Estimate for Huntington Ingalls’ 2022 earnings suggests a growth rate of 13.4% from the prior-year reported figure. Shares of HII have gained 15% in the past year.

Shares of General Dynamics have rallied 8.2% in the past year against the industry’s decline of 23.1%. 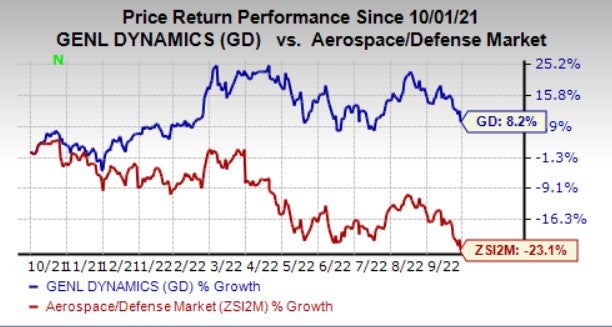 Are US New Vehicle Sales in 2022 Headed for a Decade Low?