1  United Airlines, currently carrying a Zacks Rank #2 (Buy), reported third-quarter 2022 earnings (excluding 5 cents from non-recurring items) of $2.81 per share, beating the Zacks Consensus Estimate of $2.21. Upbeat air-travel demand aided results. The third quarter of 2022 was the second consecutive profitable quarter at UAL since the onset of the pandemic.

For the fourth quarter of 2022, United Airlines expects capacity to decline around 9-10% from the fourth-quarter level of 2019. Current-year capacity is likely to be 13% less than the 2019 actuals. CASM, excluding fuel, third-party business expenses, profit-sharing and special charges, is anticipated to increase 11-12% in the September quarter from the corresponding 2019 level. The metric is anticipated to increase approximately 15% from the 2019 actuals.

United Airlines was also in the news recently when it announced the decision to add flights to Australian cities with the relaxation of COVID-related travel restrictions and the surge in air-travel demand.. The story was reported in detail in the previous week’s write-up.

2. American Airlines’ third-quarter 2022 earnings of 69 cents per share surpassed the Zacks Consensus Estimate of 54 cents despite higher costs. In the year-ago quarter, AAL incurred a loss of 99 cents per share. The third quarter of 2022 was the second consecutive profitable quarter, excluding net special items, at AAL since the onset of the pandemic. Operating revenues of $13,462 million skyrocketed 50.1% year over year and surpassed the Zacks Consensus Estimate of $13,457.5 million. Driven by soaring demand on healthy bookings, management expects total revenues in the fourth quarter of 2022 to be roughly 11-13% higher than the level recorded in fourth-quarter 2019. Management expects total revenue per available seat mile to be 18-20% higher than the fourth-quarter 2019 actuals. AAL expects the December-quarter earnings per share (excluding net special items) in the 50-70 cents band.

3. At Alaska Air, quarterly earnings of $2.53 per share beat the Zacks Consensus Estimate of $2.41. The bottom line surged 72.1% year over year. Operating revenues of $2,828 million outperformed the Zacks Consensus Estimate of $2,827.4 million. The top line jumped 45% year over year, with passenger revenues accounting for 92.5% of the top line and soaring 47% owing to continued recovery in air-travel demand. Alaska Air expects total revenues to increase 12-15% from the fourth-quarter 2019 actuals. ALK expects capacity to decline 7-10% in the fourth quarter from the comparable period’s level in 2019. Passenger load factor (% of seats filled with passengers) is expected to be in the range of 83-86%. CASM, excluding fuel and special items, is predicted to climb 20-23% in the fourth quarter from the 2019 level. Economic fuel cost per gallon is estimated in the band of $3.50-$3.70 for the fourth quarter.

4. At its special meeting on Oct 19, Spirit Airlines’ shareholders voted in favor of its impending takeover by JetBlue. The transaction is expected to close by the first half of 2024. Per Ted Christie, president and CEO, Spirit Airlines: "This is an important step forward on our path to closing a combination that will create the most compelling national low-fare challenger to the dominant U.S. carriers. We look forward to continuing our ongoing discussions with regulators as we work toward completing the transaction and delivering value to Team Members, Guests and stockholders." 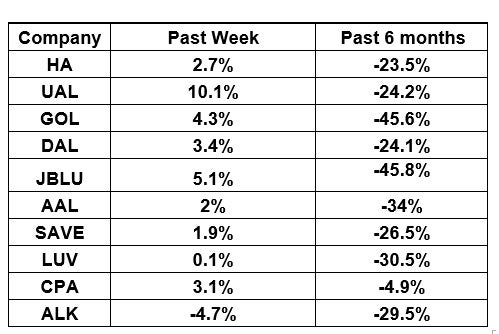 The third-quarter earnings reports of other carriers are scheduled to be out in the coming days.

MaxLinear (MXL) to Report Q3 Earnings: What's in the Cards?