The company remains on track with its efforts to enhance customers' in-store and digital experiences. Consequently, management raised its 2022 guidance. It also launched an operational efficiency and optimization restructuring program.

However, shares of this Zacks Rank #4 (Sell) company have plunged 47.3% in the past three months compared with the industry’s 7.2% decline. 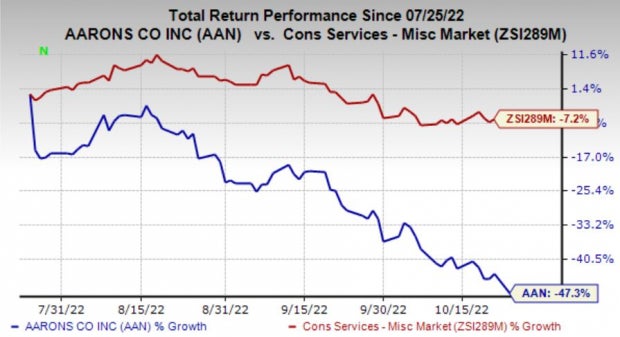 Aaron's delivered adjusted earnings of 31 cents per share, which surpassed the Zacks Consensus Estimate of 16 cents and our estimate of 20 cents. However, the bottom line declined 62.7% year over year from 83 cents per share reported in the prior-year quarter due to dismal margins and a higher provision for lease merchandise write-offs at the Aaron's Business. On a GAAP basis, the company reported a loss of 51 cents per share against earnings of 73 cents in the year-ago quarter.

Consolidated revenues grew 31.2% to $593.4 million driven by gains from the BrandsMart buyout, somewhat offset by weak lease revenues and fees, as well as drab retail sales at the Aaron's business. The figure beat the Zacks Consensus Estimate of $571 million and our estimate of $578.2 million.

For BrandsMart, revenues were $183.3 million in the third quarter of 2022, driven by strength in appliances and e-commerce, which offset weak product sales stemming from the deflation in certain consumer electronics categories. The company remains optimistic about its performance in the near future.

Driven by the solid quarterly results, management raised the 2022 view.

Toro currently sports a Zacks Rank #1 (Strong Buy). TTC has a trailing four-quarter earnings surprise of 1.4%, on average. You can see the complete list of today’s Zacks #1 Rank stocks here.

The Zacks Consensus Estimate for Toro’s current financial year’s sales and earnings suggests growth of 14.4% and 16%, respectively, from the year-ago period's reported numbers.

Crocs currently carries a Zacks Rank #2 (Buy). The company has a trailing four-quarter earnings surprise of 21.9% on average. CROX has an expected long-term earnings growth rate of 15%.

The Zacks Consensus Estimate for Crocs’ current financial year’s sales and earnings per share suggests growth of 49.7% and 20.7%, respectively, from the year-ago period's reported numbers.

lululemon presently has a Zacks Rank #2. The company has a trailing four-quarter earnings surprise of 10.4%, on average. LULU has an expected long-term earnings growth rate of 20%.

The Zacks Consensus Estimate for lululemon’s current financial-year sales and earnings suggests growth of 26.7% and 26.8% from the year-ago period’s reported numbers, respectively.