Adjusted earnings (excluding 2 cents from non-recurring items) per share of $1.34 outpaced the consensus mark by 10.7% and improved 20.7% year over year.

Republic Services' average recycled-commodity price per ton sold in the third quarter was $162, down $56 on a sequential basis and $68 year over year.

So far this year, shares of Republic Services have gained 1.4% against an 11.5% decline of the industry it belongs to. 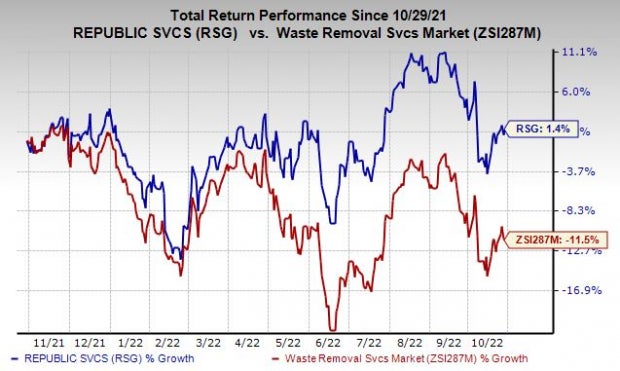 Quarterly revenues of $3.6 billion surpassed the consensus estimate by 1.9% and increased 22.6% year over year. RSG’s top line includes a favorable impact of 10.2% from internal growth and 12.4% from acquisitions/divestitures.

Total selling, general and administrative expenses were $362.8 million, up 21% from the year-ago quarter’s figure.

Republic Services exited third-quarter 2022 with cash and cash equivalents of $81.4 million compared with $119.4 million at the end of the prior quarter.

Long-term debt (net of current maturities) was $11.2 billion compared with $11.6 billion at the end of the prior quarter.

RSG generated $819.9 million of cash from operating activities in the reported quarter.  The adjusted free cash flow was $513.2 million.

During the reported quarter, RSG did not repurchase any shares. As of Jun 30, 2022, the remaining authorized purchase capacity under October 2020 buyback program was $1.5 billion.

RSG announced that its board cleared a quarterly cash dividend of 49.5 cents per share. The dividend will be paid out on Jan 13, 2023, to its shareholders of record as of Jan 3.

Adjusted earnings (excluding 39 cents from non-recurring items) of $1.73 per share beat the Zacks Consensus Estimate by 5.5% but decreased 6.5% on a year-over-year basis. However, revenues of $1.24 billion beat the consensus estimate by 2.3% and improved 1.8% year over year on a reported basis and 4% on a local-currency basis.

Adjusted earnings (excluding a penny from non-recurring items) of 63 cents per share beat the Zacks Consensus Estimate by 6.8%. The bottom line has been constant over the past year. Net revenues of $2.3 billion beat the consensus estimate by 0.3% but declined 9.7% on a year-over-year basis. Total revenues of $2.64 billion increased 3.8% year over year.

What's in the Offing for Emerson (EMR) in Q4 Earnings?