Invesco (IVZ - Free Report) announced preliminary assets under management (AUM) for October 2022. The company’s month-end AUM of $1,360.6 billion represented an increase of 2.8% from the previous month.

AUM was positively impacted by favorable market returns, which increased it by $32 billion. However, the company experienced net long-term outflows of $1.1 billion and non-management fee-earning net outflows of $2 billion. Nevertheless, money market net inflows were $9.7 billion.

Because of foreign exchange rate movements, AUM declined by $1.7 billion.

At the end of the reported month, the company’s Equity AUM was $626.5 billion, up 4.9% from the previous month. Alternatives AUM increased 1.2% sequentially to $188 billion.

However, despite the cost-saving efforts, the company’s expenses have been elevated due to its inorganic growth initiatives and investments in franchise. Higher costs will likely hurt profitability to an extent in the near term.

Over the past year, shares of Invesco have lost 38.3% compared with a decline of 25.8% of the industry. 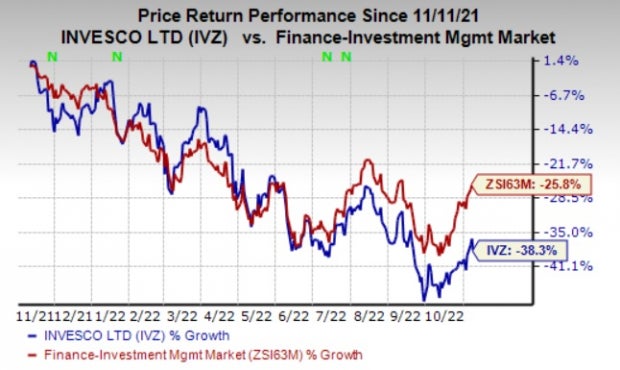 For Franklin, the increase in the reported month’s AUM reflected the impact of positive markets, partially offset by long-term net outflows, which included the previously disclosed $2.1 billion fixed-income institutional redemption that had minimal impact on revenues.

AllianceBernstein Holding L.P.’s (AB - Free Report) AUM of $627 billion for October 2022 represented a rise of 2.3% from $613 billion recorded at the end of the prior month. AB’s AUM increase was driven by market appreciation, partially offset by net outflows in each channel.

Here's How Home Depot (HD) is Positioned Ahead of Q3 Earnings