The Children’s Place, Inc. (PLCE - Free Report) reported third-quarter fiscal 2022 results, with the bottom line missing the Zacks Consensus Estimate and declining year over year. The top line declined but surpassed the consensus mark. However, comparable retail sales continued with a sluggish run in the quarter

Management lowered the top-and bottom-line guidance for fiscal 2022 and the fourth quarter owing to a tough macroeconomic environment and persistent supply chain cost pressure. The company highlighted that sales for the first two weeks of November were lower than expected. The company is anticipating that record-high inflation will continue to impactits core consumer leading to reduced demand during the holiday season. In addition, the company is planning a significantly higher promotional environment in the fiscal fourth quarter.

The Children’s Place posted adjusted earnings per share (EPS) of $3.33, down from $5.43 reported in the year-ago quarter. Earnings missed the Zacks Consensus Estimate of $3.97.

Net sales of $509.1 million declined 8.8% year over year, primarily due to soft consumer demand stemming from inflationary pressure, the impact of permanent store closures and the lapping of the improved child tax credit and solid Back to School season last August. Comparable retail sales declined 10% in the reported quarter. Net sales beat the Zacks Consensus Estimate of $500.5 million.

Management highlighted that digital comprised 50% of the retail sales during the reported quarter compared with 48% in the year-ago level. The company witnessed impressive e-commerce traffic during the third quarter.

Adjusted gross profit came in at $176.9 million, down $68.1 million from $245.0 million reported in the year-ago quarter. Adjusted gross margin deleveraged 910 basis points (bps) to 34.8% due to increased supply chain costs that include inbound freight, outbound freight and distribution costs. Deleverage of fixed costs due to softness in net sales was a reason.

Adjusted SG&A came in at $105.4 million, down from $114.8 million reported in the year-ago quarter. Adjusted SG&A, as a percentage of sales, deleveraged 10 bps to 20.7% due to deleveraging of fixed costs and increased planned marketing spending. These were somewhat offset by reduced incentive compensation expenses and discretionary spending. 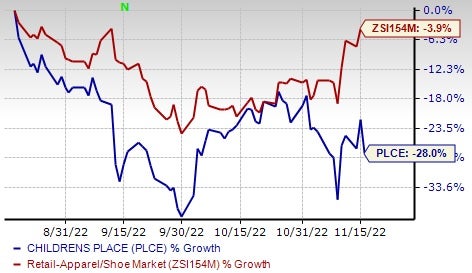 The Children’s Place ended the quarter with cash and cash equivalents of $19 million. The company had $265 million outstanding on its revolving credit facility as of Oct 29, 2022. Stockholders' equity at the end of the quarter was $212.2 million.

During the quarter, the company bought back 434,000 shares for approximately $18 million. As of Oct 29, 2022, the company had $178 million remaining under its existing share repurchase program.

The Children’s Place estimates fourth-quarter fiscal 2022 net sales of $460-$470 million. The company anticipates a low-teens percent decline in comparable retail sales. The company envisions quarterly adjusted operating income in the range of 2.5-3.3% of net sales. Lastly, adjusted EPS is anticipated in the range of 50-75 cents in the fiscal fourth quarter.

The company’s outlook reflects the continuation of a tough macroeconomic environment, record inflation, escalated freight and supply chain costs, a greater promotional environment and reduced incentive compensation, among others.

PLCE’s shares have dropped 28% in the past three months compared with the industry’s decline of 3.9%.

We have highlighted three better-ranked stocks.

The Zacks Consensus Estimate for Dillard's current financial year sales and EPS suggests a growth of 6.6% and 3.4%, respectively, from the year-ago period.

The Zacks Consensus Estimate for Dollar General’s current financial year sales and EPS suggests growth of 10.8% and 13.8%, respectively, from the year-ago period. Dollar General has a trailing four-quarter earnings surprise of 2.2%, on average.

The Zacks Consensus Estimate for Sprouts Farmers’ current financial year revenues and EPS suggests an increase of 4.6% and 9.5%, respectively, from the year-ago reported figure. Sprouts Farmers has a trailing four-quarter earnings surprise of roughly 10%, on average.

Reasons to Add Paychex (PAYX) Stock to Your Portfolio Now