Apellis Pharmaceuticals, Inc. (APLS - Free Report) announced that the FDA has accepted its unsolicited major amendment to the new drug application (“NDA”) for its targeted C3 therapy, pegcetacoplan, for the treatment of geographic atrophy (“GA”) secondary to age-related macular degeneration (“AMD”), a leading cause of blindness.

A decision from the regulatory body is now expected on Feb 26, 2023. The FDA also reaffirmed that it is not planning to hold an advisory committee meeting to discuss the above application.

Earlier this month, APLS announced plans to submit the 24-month efficacy data from the phase III DERBY and the phase III OAKS studies as part of its NDA application. The data showed increasing and consistent effects with every-other-month and monthly treatments with pegcetacoplan as well as a favorable safety profile in both studies.

Shares of Apellis were up 16.7% on Friday following the announcement of the news. The stock has improved 6.7% so far this year against the industry’s decline of 19.2%. 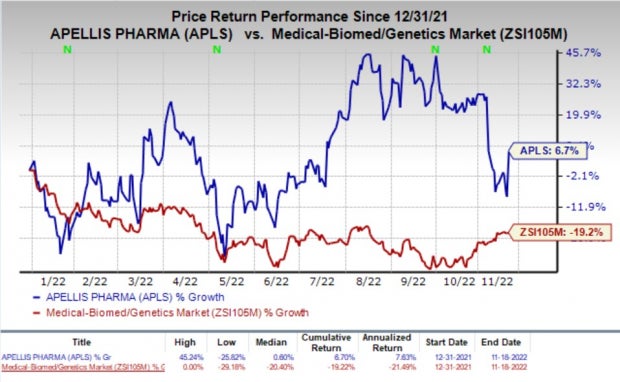 A marketing authorization application for pegcetacoplan to treat GA is expected to be filed by 2022-end with the European Medicines Agency.

In May 2021, the FDA approved pegcetacoplan (marketed as Empaveli) as a monotherapy treatment for adult patients suffering from PNH.

AZN closed the acquisition of rare-disease drugmaker Alexion for $39 billion in July 2021, strengthening its immunology franchise.

The European Commission approved pegcetacoplan (marketed as Aspaveli) to treat adult patients with PNH who are anemic after treatment with a C5 inhibitor for at least three months in December 2021.

In the first nine months of 2022, Empaveli/Aspaveli generated sales worth $45.4 million.

Several label expansion studies on pegcetacoplan are currently underway. Potential approval for GA and additional indications will boost sales and drive growth for the company in the days ahead.

Earnings of Angion Biomedica surpassed estimates in three of the trailing four quarters and missed the mark on the other occasion. ANGN witnessed an earnings surprise of 66.42% on average.

Earnings of Syndax Pharmaceuticals surpassed estimates in three of the trailing four quarters and met the same on the other occasion. SNDX witnessed an earnings surprise of 95.39% on average.