The Zacks Retail and Wholesale sector has sailed through rough waters in 2022, down more than 20% and underperforming the S&P 500 by a fair margin.

A company that many are familiar with, DICK’S Sporting Goods (DKS - Free Report) , is on deck to unveil quarterly earnings on November 22nd, before the market opens.

Currently, DKS carries a Zacks Rank #3 (Hold) paired with an overall VGM Score of an A.

How does everything else stack up heading into the release? Let’s take a closer look.

DKS shares have been much stronger than the S&P 500 year-to-date, down roughly 6%. 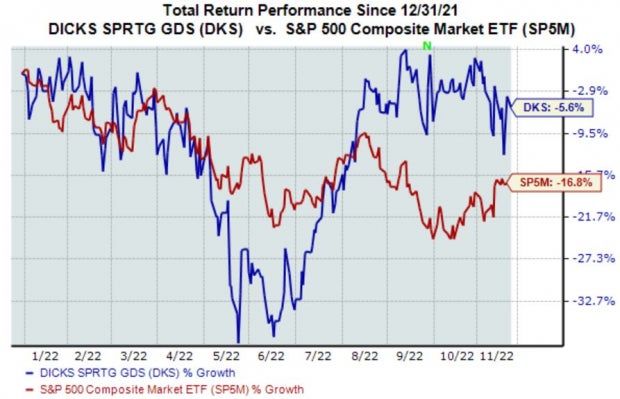 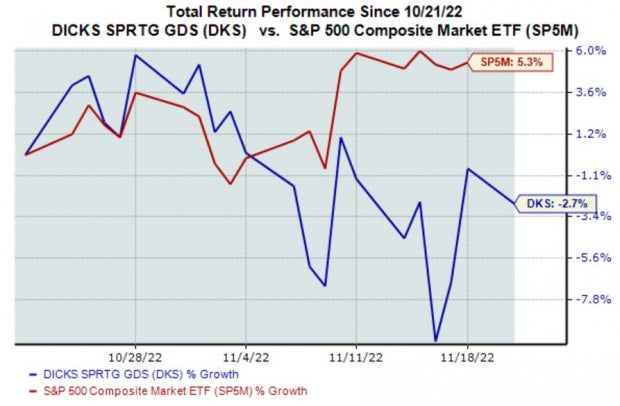 The near-term price action of DKS shares indicates that sellers have taken a tight grip as of late.

The company’s shares currently trade at a 9.5X forward earnings multiple, nicely beneath the 11.1X five-year median and representing a 61% discount relative to the Zacks Retail and Wholesale sector.

DKS sports a Style Score of an A for Value.

A singular analyst has upped their outlook over the last several months, with the Zacks Consensus EPS Estimate of $2.24 indicating a 30% drop in earnings Y/Y.

DKS is on an impressive earnings streak, exceeding both earnings and revenue estimates in nine consecutive quarters.

Just in its latest print, the company registered a 4.3% bottom-line beat paired with a 1.2% sales surprise. Below is a chart illustrating the company’s revenue on a quarterly basis.

DKS shares have been stronger than the general market year-to-date but have lagged over the last month.

One analyst has upped their earnings outlook as of late, with estimates alluding to a Y/Y drop in both earnings and revenue.

Further, the company has consistently exceeded quarterly results, chaining together a long streak of positive surprises.