Shares of American Eagle Outfitters, Inc. (AEO - Free Report) rallied more than 18% on Nov 22, following the better-than-expected third-quarter fiscal 2022 results. The top and the bottom line surpassed the Zacks Consensus Estimate and our estimate in the fiscal third quarter. Results reflected gains from AEO’s efforts to reset inventory and reduce costs. Revenues were partly aided by contribution from its supply-chain business and Quiet Platforms.

American Eagle reported earnings of 42 cents per share, surpassing the Zacks Consensus Estimate of 23 cents. Our estimate for the bottom line was 26 cents a share. The better-than-expected earnings resulted from aggressive actions to reset inventory and reduce expenses. The bottom line declined 44.7% from adjusted earnings of 76 cents reported in third-quarter fiscal 2021.

AEO’s inventory improved 8% from the year-ago quarter’s reading to $798 million, with continued progress expected in the fiscal fourth quarter as well. This marks a significant improvement from a 36% increase in the second quarter of fiscal 2022. Inventory per unit was up 7%. American Eagle’s actions to bring inventory receipts in line with the demand trends have been paying off so far. AEO is well-positioned with current inventory for the holiday season. It anticipates inventory at the end of the fiscal fourth quarter to be down year over year.

Total net revenues of $1,240.6 million declined 3% year over year but beat the Zacks Consensus Estimate of $1,201 million. Our estimate for the top line was $1,221.4 million. Brand revenues declined 5% in the fiscal third quarter but were better than AEO’s expectation of a high single-digit decline. However, revenues were partly aided by a 2-percentage-point contribution from supply-chain business and Quiet Platforms.

Shares of the Zacks Rank #4 (Sell) company have plunged 39.4% year to date compared with the industry’s decline of 39.5%. 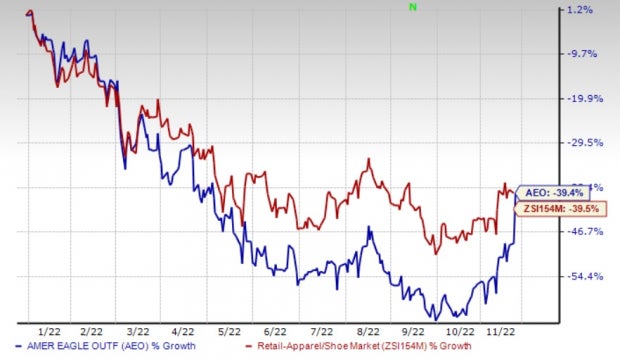 Store revenues fell 4% year over year. Store sales were up 3% from the pre-pandemic levels.

The gross profit dropped 15% year over year to $480 million, while the gross margin contracted 560 basis points (bps) to 38.7%. The decline mainly resulted from a 400-bps impact from higher markdowns and increased product costs and a 70-bps impact from the scaling of the Quiet Platforms business. The gross margin was also affected by increased rent and warehousing expenses, slightly offset by lower incentive compensation.

Operating income was $117.5 million in the fiscal third quarter, down by a significant 44% from $209.7 million in the year-ago quarter but up from the third-quarter fiscal 2019 tally. Operating income included a $10-million loss from Quiet Platforms. The operating margin contracted 700 bps year over year to 9.5%.

American Eagle ended third-quarter fiscal 2022 with cash and cash equivalents of $82.1 million. Total shareholders’ equity as of Oct 29, 2022, was $1,462.5 million. AEO had total liquidity, including available credit, of $423 million at the fiscal-quarter end.

For the fiscal fourth quarter, American Eagle expects brand revenues to decline mid-single-digits. Comps are anticipated to be in line with the fiscal third quarter’s level. The company expects gross margin to be 32-33%, which is at the higher end of the previously projected low-30% range. While AEO made significant progress in inventory rightsizing, it expects the margins to reflect the impact of the highly promotional holiday season.

Management is on track with efforts to reduce expenses across store payroll, corporate expense, professional services and advertising. It anticipates delivering $100 million of expense reductions compared with the original plan. Consequently, SG&A expense is likely to be flat with the year-earlier fiscal quarter’s level in the fiscal fourth quarter.

American Eagle estimates the tax rate in the high-20s in the fiscal fourth quarter, with shares outstanding of 196 million.

Tecnoglass is engaged in manufacturing and selling architectural glass and windows, and aluminum products for the residential and commercial construction industries. TGLS presently sports a Zacks Rank #1 (Strong Buy). TGLS has a trailing four-quarter earnings surprise of 26.9%, on average. You can see the complete list of today’s Zacks #1 Rank stocks here.

The Zacks Consensus Estimate for Tecnoglass’s current-year sales and EPS suggests growth of 40.5% and 76.4%, respectively, from the corresponding year-ago reported numbers. Shares of TGLS have rallied 16.8% year to date.

Ross Stores, an off-price retailer of apparel and home accessories in the United States, currently carries a Zacks Rank of 1. ROST has an expected EPS growth rate of 10.5% for three-five years. Shares of ROST have increased 0.9% year to date.

The Zacks Consensus Estimate for Ross Stores’ current-year sales and earnings per share (EPS) suggests a decline of 2% and 13.1%, respectively, from the corresponding year-ago reported figures. ROST has a trailing four-quarter earnings surprise of 10.5%, on average.

Dollar General, one of the largest discount retailers in the United States, has a Zacks Rank #2 (Buy) at present. DG has a trailing four-quarter earnings surprise of 2.2%, on average. The stock has gained 9.2% year to date.

The Zacks Consensus Estimate for Dollar General’s current-year sales and EPS suggests growth of 10.8% and 13.8%, respectively, from the comparable year-ago reported numbers. DG has an expected EPS growth rate of 11.1% for three-five years.