Diageo Plc (DEO - Free Report) is a stock to watch, given its business momentum on continued recovery in the on-trade channel, strong consumer demand in the off-trade and market share gains. DEO is anticipated to retain the strength in its business on constant premiumization efforts and favorable industry trends, particularly in the spirits category. Its organic net sales were up 21.4% year over year in fiscal 2022.

Recovery in the on-trade channel in North America and Europe, and the partial recovery in Travel Retail have been aiding the price/mix for a while. Diageo’s positive mix also resulted from the robust performance of its super-premium-plus brands, particularly scotch, tequila and Chinese white spirits.

Shares of the Zacks Rank #3 (Hold) company have gained 2% in the past three months compared with the industry’s growth of 1.1%. DEO also compared favorably with the Consumer Staples sector’s growth of 1% and against the S&P 500’s decline of 1.3%. 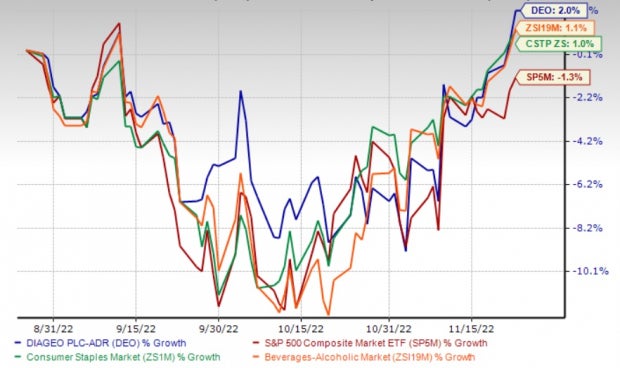 Diageo is well-poised for growth from effective marketing and exceptional commercial execution. It is likely to invest strongly in marketing and innovation, and leverage its revenue growth management capabilities, including strategic pricing actions. This is likely to support DEO in the near and the long term.

Although Diageo expects the operating environment to be challenging in fiscal 2023, it remains confident about its business resilience and its ability to navigate the headwinds. DEO is confident about the long-term growth potential of the total beverage alcohol sector and expects to expand its value share by 50% in the sector to 6% within 2030.

Diageo is on track to deliver on its medium-term guidance for fiscal 2023-2025, wherein it targets organic sales growth of 5-7% and an organic operating profit rise of 6-9%.

For fiscal 2023, Diageo expects net sales growth across North America, Europe and the Asia Pacific. However, the growth rate is likely to moderate from the fiscal 2022 level due to the robust on-trade recovery witnessed in fiscal 2022. It anticipates continued organic operating margin growth in fiscal 2023, aided by strong premiumization trends and operating leverage despite constant investment in marketing. DEO expects an effective interest rate of 3.5% for fiscal 2023.

Diageo suffers persistent inflationary pressures, induced by higher commodity costs, particularly agave, energy expenses and supply disruptions. As a substantial portion of Diageo’s business comes from international operations, exchange rate fluctuations have been hampering its sales for a while.

Coca-Cola FEMSA produces, markets and distributes soft drinks throughout the metropolitan area of Mexico City, in Southeastern Mexico, and the metropolitan region in Buenos Aires, Argentina. It currently sports a Zacks Rank #1 (Strong Buy). KOF has a trailing four-quarter earnings surprise of 33.6%, on average. Shares of KOF have risen 9.9% in the past three months.

The Zacks Consensus Estimate for Coca-Cola FEMSA’s current financial-year sales and earnings suggests growth of 15.6% and 6.2%, respectively, from the year-ago period's reported figures. KOF has an expected EPS growth rate of 10.3% for three-five years.

Ambev is engaged in producing, distributing and selling beer, carbonated soft drinks, and other non-alcoholic and non-carbonated products in many countries across the Americas. ABEV currently has a Zacks Rank #2 (Buy). Shares of ABEV have declined 3.6% in the past three months.

The Zacks Consensus Estimate for Ambev’s current financial-year sales and earnings suggests growth of 19.4% and 6.7%, respectively, from the year-ago period’s reported figures. ABEV has an expected EPS growth rate of 9.1% for three-five years.

General Mills is a global manufacturer and marketer of branded consumer foods sold through retail stores. It currently has a Zacks Rank of 2. GIS has an expected EPS growth rate of 7.5% for three-five years. Shares of GIS have rallied 8.5% in the past three months.

The Zacks Consensus Estimate for General Mills’ current financial-year sales and earnings per share suggests growth of 2.7% and 3.8%, respectively, from the year-ago period’s reported figures.

Here's Why You Should Hold Crane Holdings (CR) Stock for Now