Here's Why You Should Hold OPKO Health (OPK) Stock For Now

OPKO Health, Inc. (OPK - Free Report) is well-poised for growth in the coming quarters, courtesy of its potential in RAYALDEE. Better-than-expected third-quarter 2022 revenues, along with a few strategic agreements, are expected to contribute further. Stiff competition and concerns regarding overdependence on RAYALDEE persist.

This renowned multinational biopharmaceutical and diagnostics company has a market capitalization of $1.14 billion. Its earnings are projected to grow 27.9% in 2023. The company is expected to maintain its strong performance. OPKO Health’s earnings met the Zacks Consensus Estimate in one of the trailing four quarters and missed the same in three, with the average earnings surprise being 94.17%. 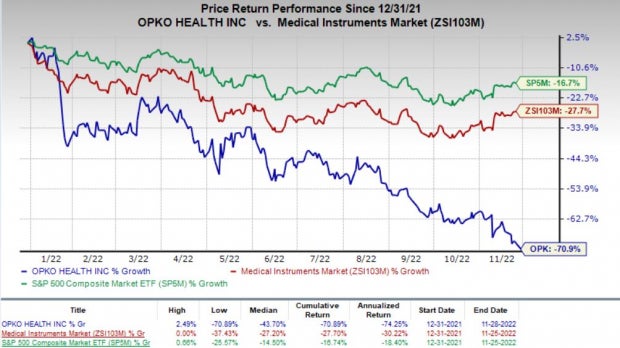 RAYALDEE’s Potential: We are upbeat about OPKO Health’s RAYALDEE business. Within the Pharmaceuticals arm, revenues from products fell 12.2% to $32.4 million, primarily due to forex headwinds in OPKO Health’s Chilean and European operations and lower sales of RAYALDEE. Although RAYALDEE sales declined during the third quarter, the drug has shown a promising growth trend in the first half of 2022. The drug has been developed for treating adult chronic kidney disease patients with secondary hyperparathyroidism. The secondary hyperparathyroidism market is likely to see a CAGR of 9% over the next five years, per a report by Fortune Business Insights.

In February, OPKO Health announced that Vifor Fresenius Medical Care Renal Pharma had initiated the commercial launch of RAYALDEE (extended-release calcifediol) in Germany, its first launch outside the United States.

Strategic Agreements: OPKO Health has entered into a slew of agreements over the past few months, raising our optimism. During the second quarter of 2022, management confirmed that BioReference Laboratories’ Scarlet Health announced a collaboration with Teladoc Health.

In May, it announced the acquisition of a privately held biotechnology company, ModeX Therapeutics, Inc. The acquisition expands the OPKO Health’s immunotherapy pipeline. These developments raise our optimism about OPKO Health. The company’s continued strength in its women's health and oncology businesses also augurs well.

Promising Q3 Results: OPKO Health exited the third quarter with better-than-expected revenues. The continued launch of OPKO Health’s NGENLA (somatrogon) by Pfizer Inc. in Japan, Germany and other global markets looks promising. Pfizer is currently seeking pricing approvals in additional European countries and continues to work with the FDA to obtain approval in the United States.

Overdependence on RAYALDEE: OPKO Health’s RAYALDEE is the company’s only pharmaceutical product approved for marketing in the United States. The company’s ability to generate revenues from product sales and achieve profitability is substantially dependent on its ability to effectively commercialize RAYALDEE. The failure to successfully commercialize RAYALDEE would have a material adverse effect on the company’s business, financial condition, cash flows and results of operations.

OPKO Health is witnessing a negative estimate revision trend for 2022. In the past 90 days, the Zacks Consensus Estimate has widened from a loss of 38 cents per share to a loss of 43 cents.

The Zacks Consensus Estimate for the company’s fourth-quarter 2022 revenues is pegged at $172.79 million, suggesting a 56.9% fall from the year-ago quarter’s reported number.

AMN Healthcare, flaunting a Zacks Rank #1 (Strong Buy) at present, has an estimated long-term growth rate of 3.2%. AMN’s earnings surpassed the Zacks Consensus Estimate in all the trailing four quarters, the average beat being 15.7%.

AMN Healthcare has lost 8.7% compared with the industry’s 40.6% decline in the past year.

ShockWave Medical has gained 13.3% against the industry’s 36.1% fall decline the past year.

McKesson, carrying a Zacks Rank #2 (Buy) at present, has an estimated long-term growth rate of 10.1%. MCK’s earnings surpassed estimates in three of the trailing four quarters and missed the same in one, the average beat being 13%.

McKesson has gained 67.9% against the industry’s 18.9% decline over the past year.